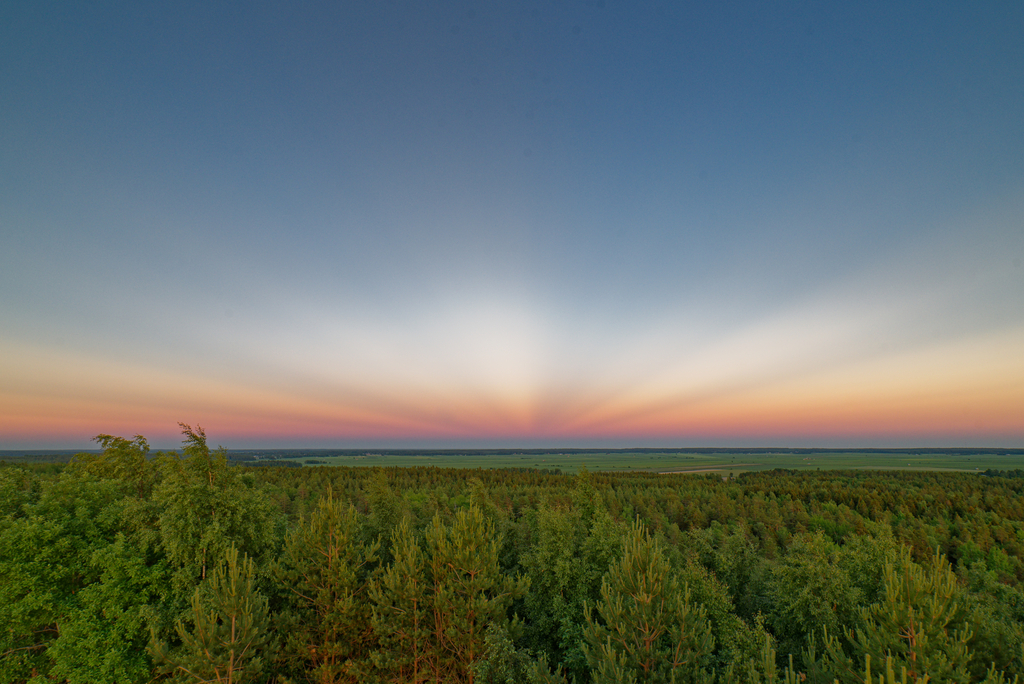 26.6. A surprisingly large number of observations of twilight rays was reported to Skywarden on the Friday night. The slightly less frequently reported component of the phenomenon opposite the sun is called the anticrepuscular rays. Mikko Luoto got a great picture of them on Friday at 23:40 pm from a ski resort tower in Vaasa. 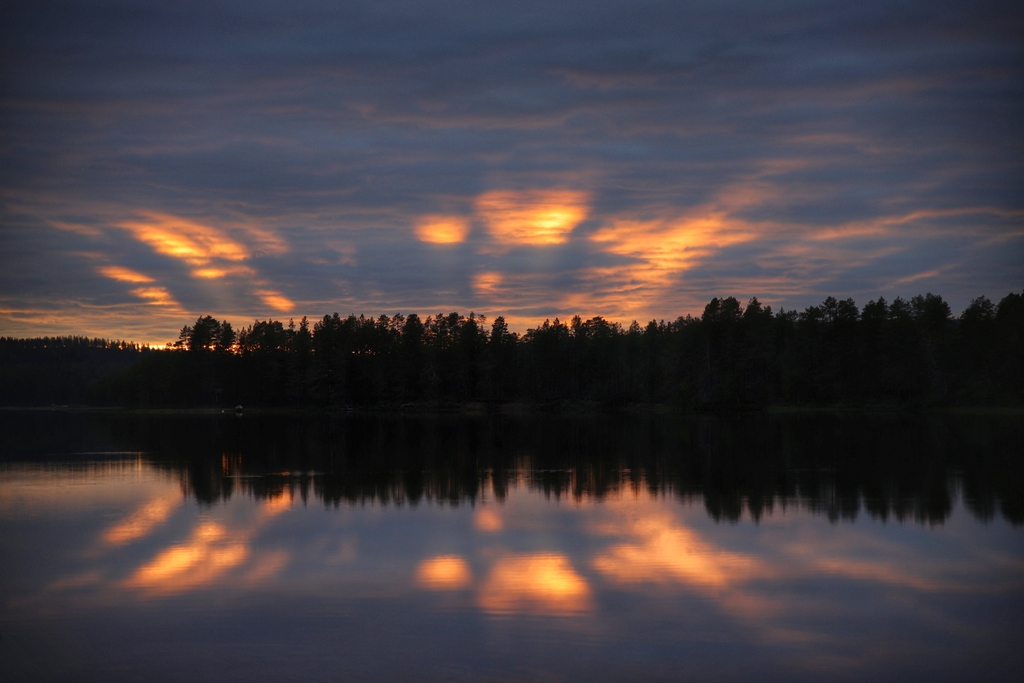 21.6. On the night between Monday and Tuesday, Kuusamo's summer night painted the underside of the cloud deck with splendid reflected cloud rays, that rank easily among the top examples of the phenomon in Taivaanvahti. The photo was taken by Jani Päiväniemi in Juuma. Cloud rays are alternations of light and shadow, the rarer reflected type arising from light whose immediate source is reflection from water surface. 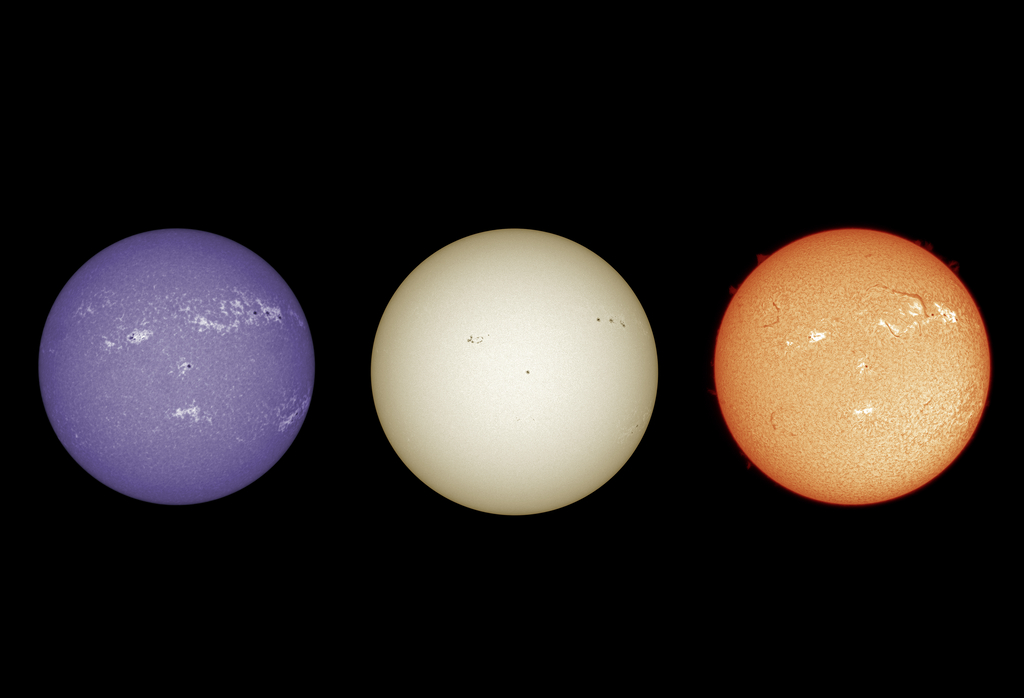 20.6. "Our near-star with three different wavelengths, which is dubbed the 'trifecta' among sun enthusiasts," says Petrus Kurppa of his photo. Calcium II K on the left, in the middle full spectrum of visible light, on the right Hydrogen alpha. The wavelength of hydrogen alpha 656 nm is in the deep red part of the spectrum, while the wavelength of calcium II K 393 nm is close to ultraviolet. 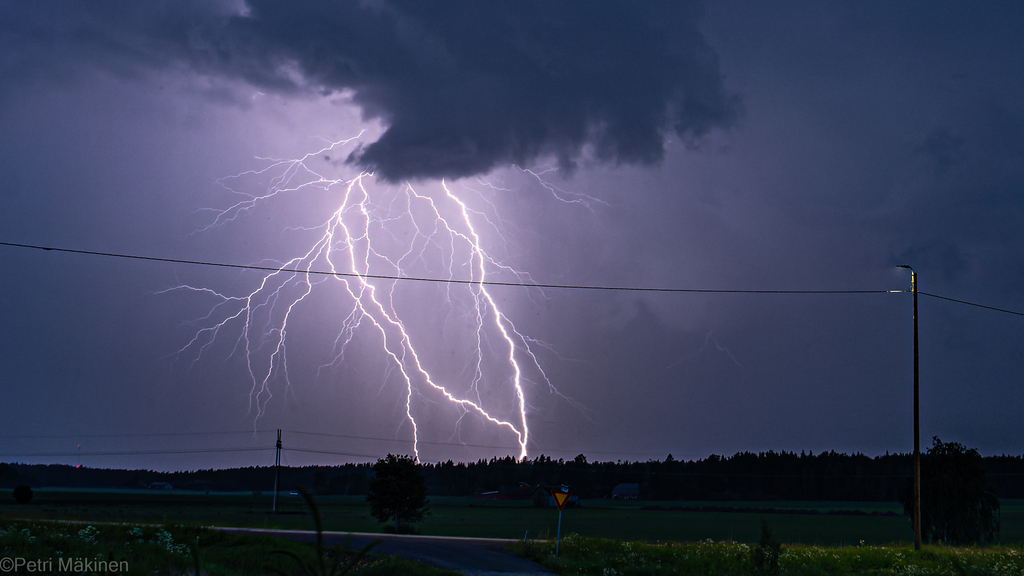 19.6. On the night between Saturday and Sunday, the first night thunderstorms of the season roarred over southern Finland. A couple of observers had set off with their cameras, Petri Mäkinen's picture show lightning in Masku immediately after midnight. "It was great to watch" says Mäkinen. 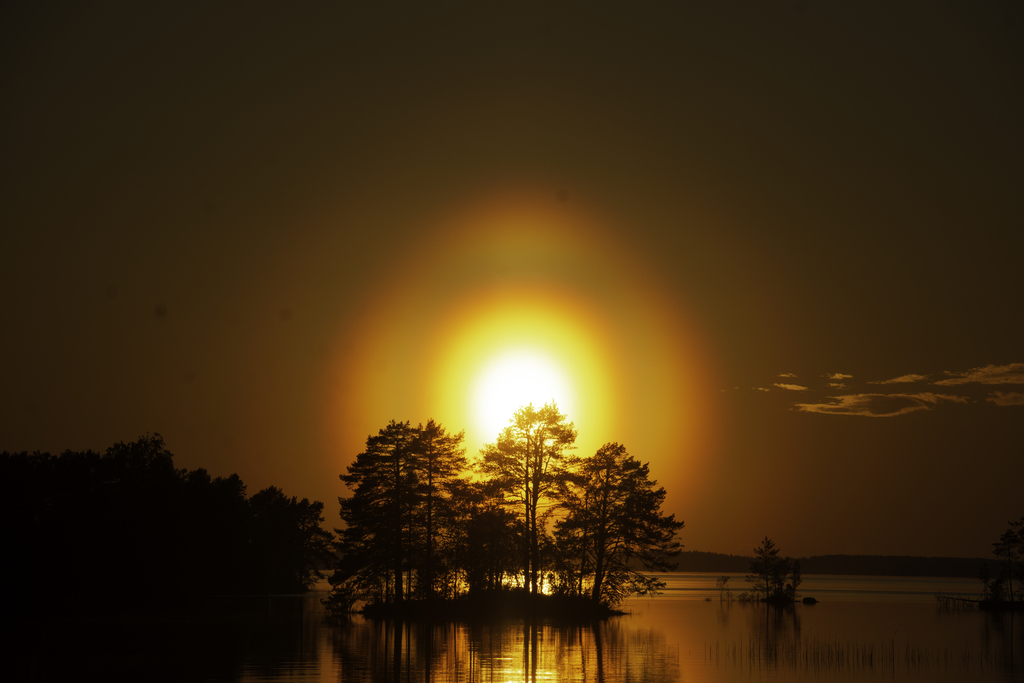 18.6. After the lame birch pollen coronas this year, the season always ends with the always dependable pine. The first observation came from Turku on June 1, and more observations are still being reported to Skywarden. Among the best of the collection is this sunset pollen corona, which Vesa Vauhkonen photographed on June 10 in Joutenlahti of Rautalampi. 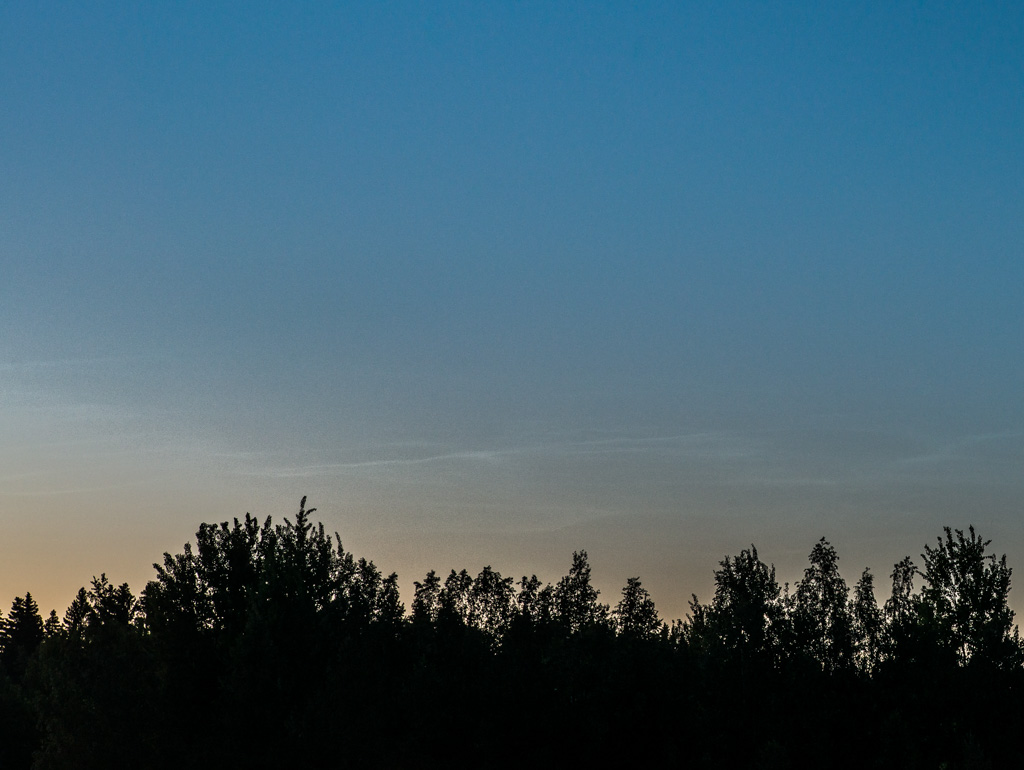 7.6. The noctillucent clouds seen on the night between Monday and Tuesday were noticed at least in Vantaa, Helsinki and Porvoo. Attached is Pentti Arpalahti's picture of Helsinki near midnight. The start date can be described as typical, the earliest start in 25-year statistics is May 7, the latest June 27. Last year offered an excellent noctillucent cloud summer, let's follow how this summer will turn out.

Observations of the first NCLs »

6.6. A champion hole punch cloud is round but sometimes no curved shape is visible, instead the cloud is straight. This is what was seen by Pia Simonen in Orimattila on Sunday. In particular in such cases there is reason to suspect that aeroplane has caused the freezing, and this is what indeed seems have happened here: "The direction of the cloud is northeast of Hki-Vantaa, which would match the Kuopio plane that flew earlier," writes Simonen.

April and May halo comparison 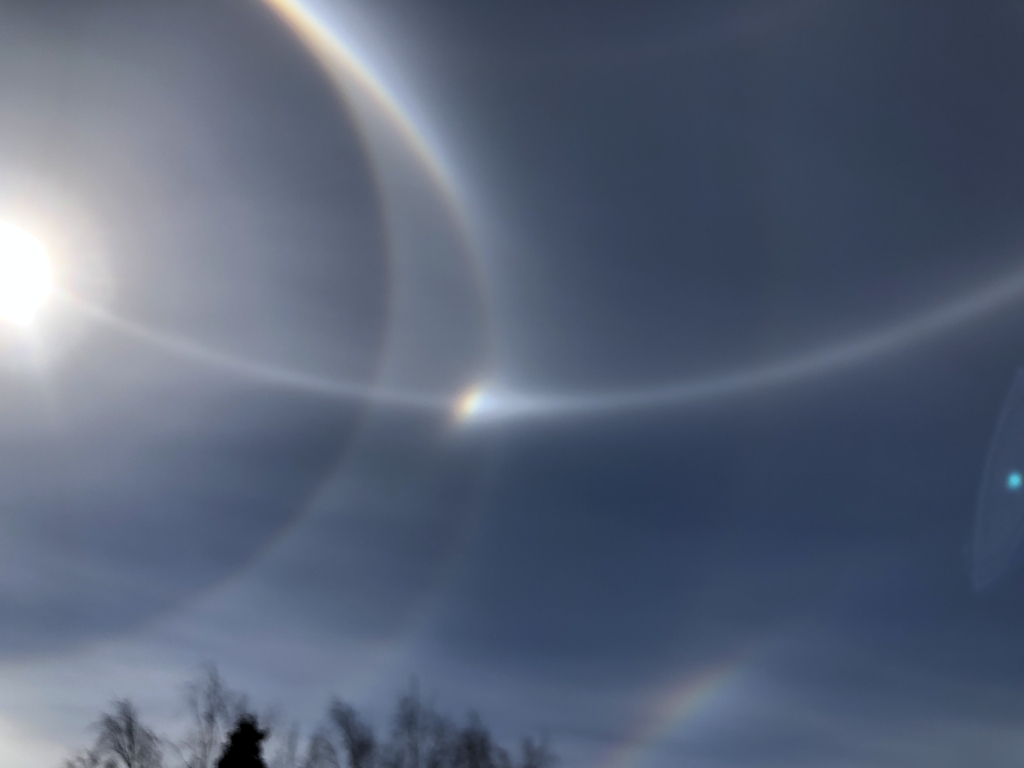 5.6. May was clearly better than April this year. Rarities were seen on 6 days in April, 11 days in May. The number of different halo forms caught was respectively 18 and 25. Total halo days were respectively 28 and 30. Compared to the previous ten years, April 2022 had low number of rarity days (variation 4-15), while May was the best so far (variation 3-10). In the picture are halos seen in Korsnäs by Jukka Kotiranta on 29 April. 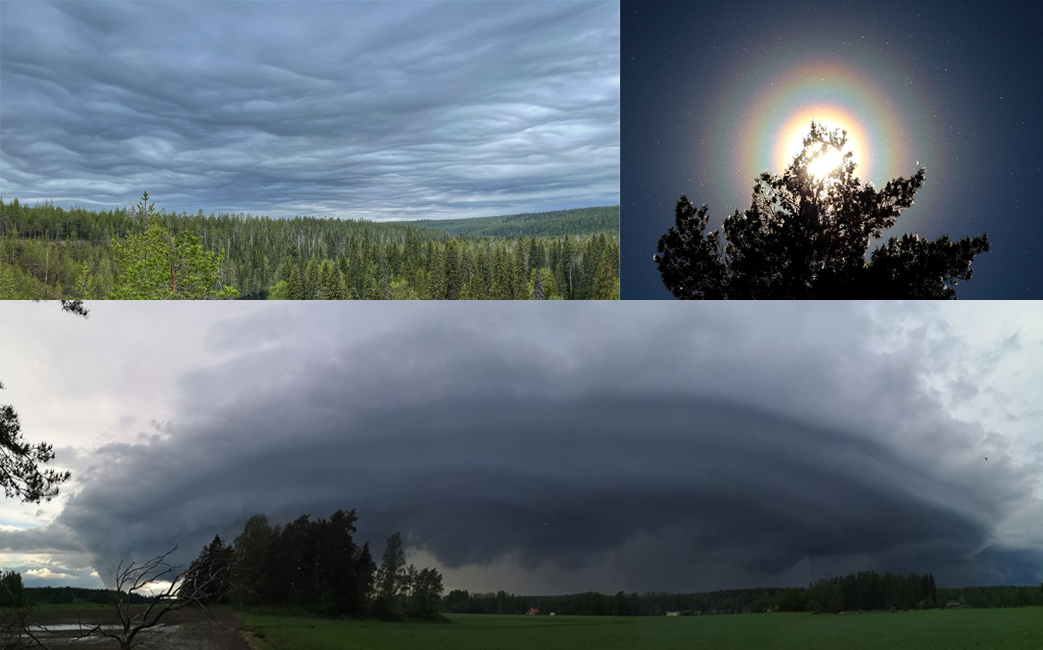 5.6. In the last few days, a few roll cloud observations have arrived in the SkyWarden, shown is an individual seen by Jyrki Turunen in Pyhtää on 4 June. Jani Päiväniemi in turn photographed picturesque Undulatus asperitas clouds in Kuusamo on the first day of June. And Mikko Peussa's sample from Turku shows that the time for pine pollen coronas is at hand.

29.5. Dry weather in the spring brings out nicely whirlwinds when the hit on a field. This case was recorded on 25 May In Kokkola Tony Furubacka. He says the phenomenon lasted about a minute.

Reflection rainbow from front and back reflections 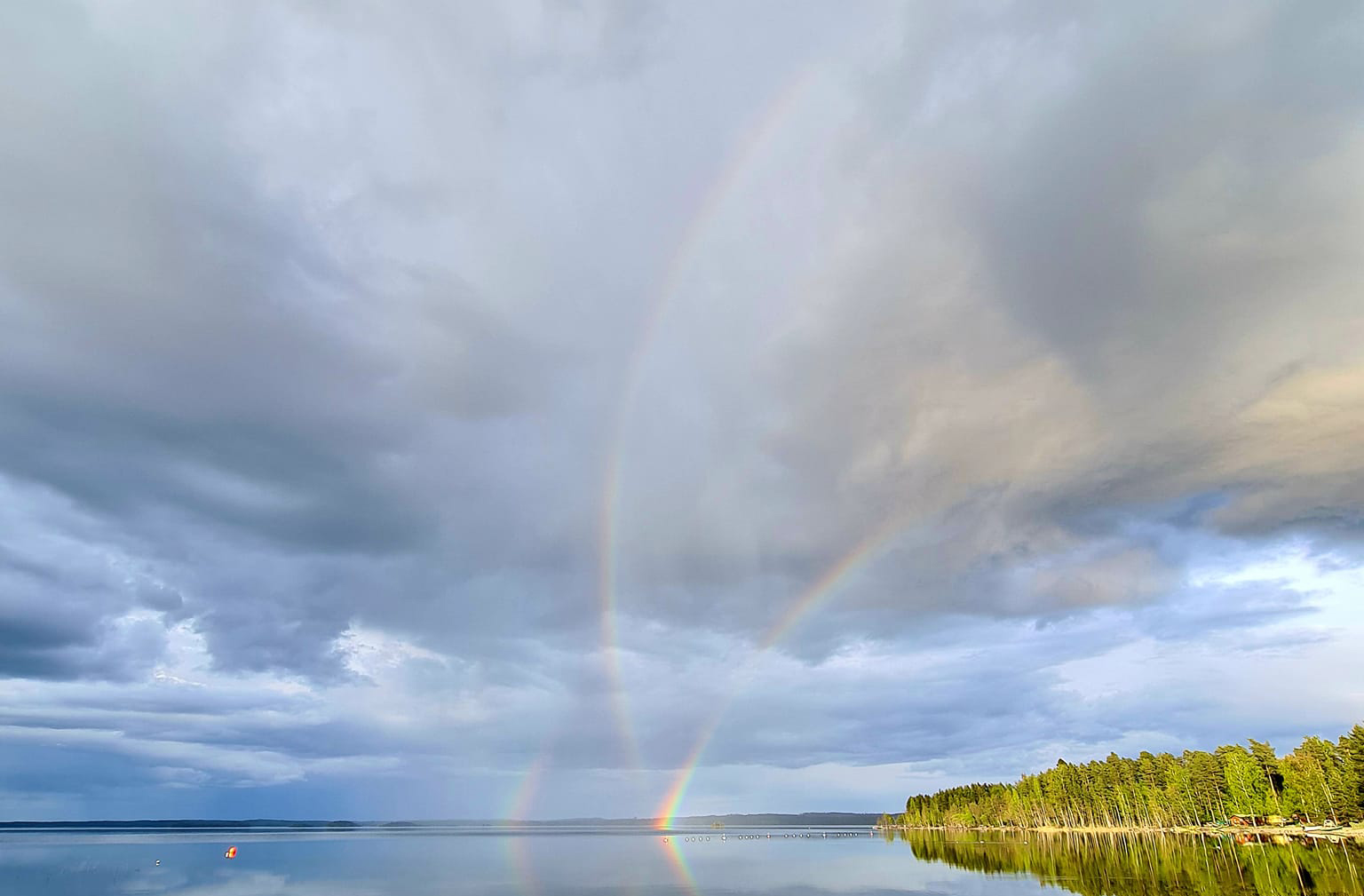 29.5. On Saturday night, Minna Järvenpää hit on a rarer type of rainbow in Lappeenranta. The specialty of the picture is the reflection rainbow, which in itself is a rare sight. But it is made even more exceptional because the arc is caused by light reflected from both the front and back of the observer. Normally only the reflection rainbow born in the former way which results in a segment occuring below the plane of the sun is seen, not the segment of the arc above the plane of the sun which is born the latter way.

The Sun during lunch breaks 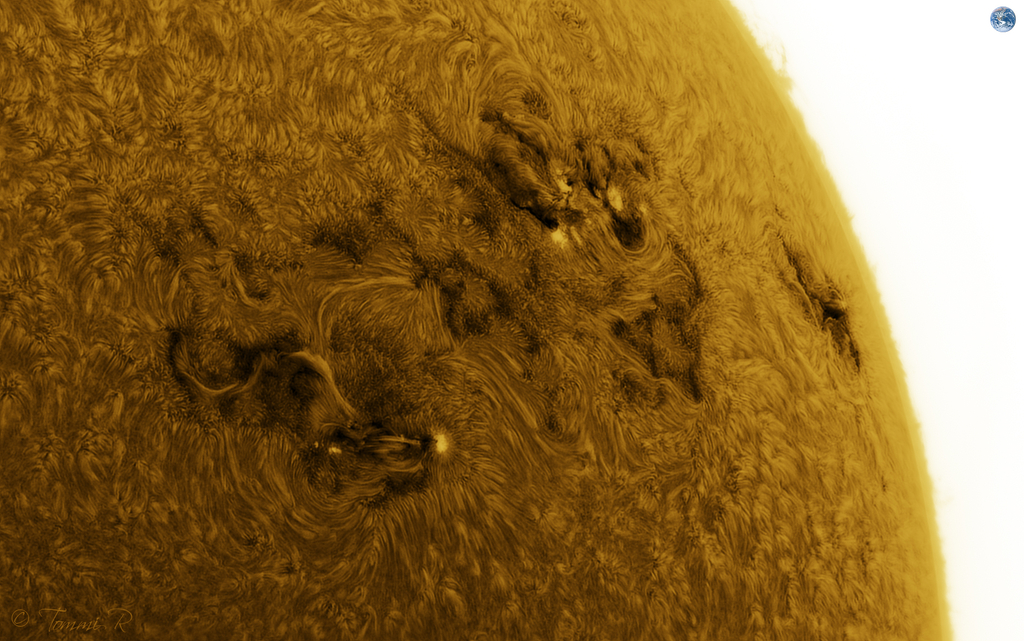 27.5. Tommi Ropponen has used work breaks for taking impressive photographs of the Sun. Shown is his take during lunch on May 24th. "Weather was just ok and if I had had time to shoot material for the animation, the result would certainly have been impressive," says Ropponen. High resolution images can be found on Astrobin.

Great halos in the sky on Wednesday and Thursday 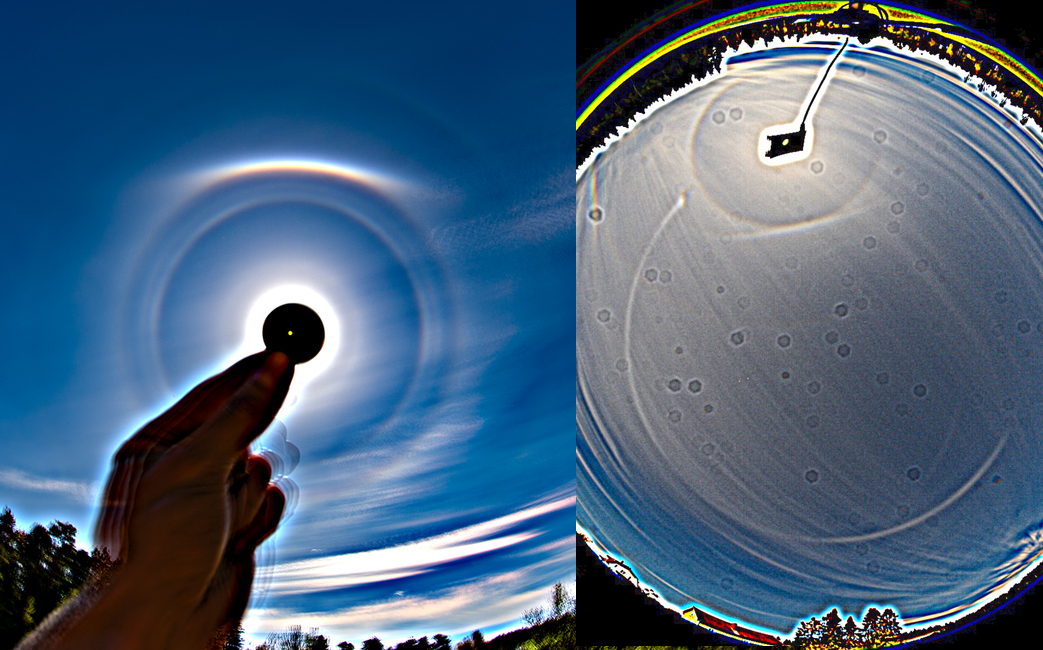 20.5. On Wednesday, fine halos were seen mainly in Muurame and Jämsä. From the latter location on the right is an image by Petri Martikainen showing Wegener arc. On Thursday, in southwestern Finland an exceptionally good odd radius displays was visible as shown by Lasse Nurminen's picture. The quality is also indicated by the fact that some observers saw the 35° halo with the naked eye. Normally, this halo is only detected in the images afterwards. 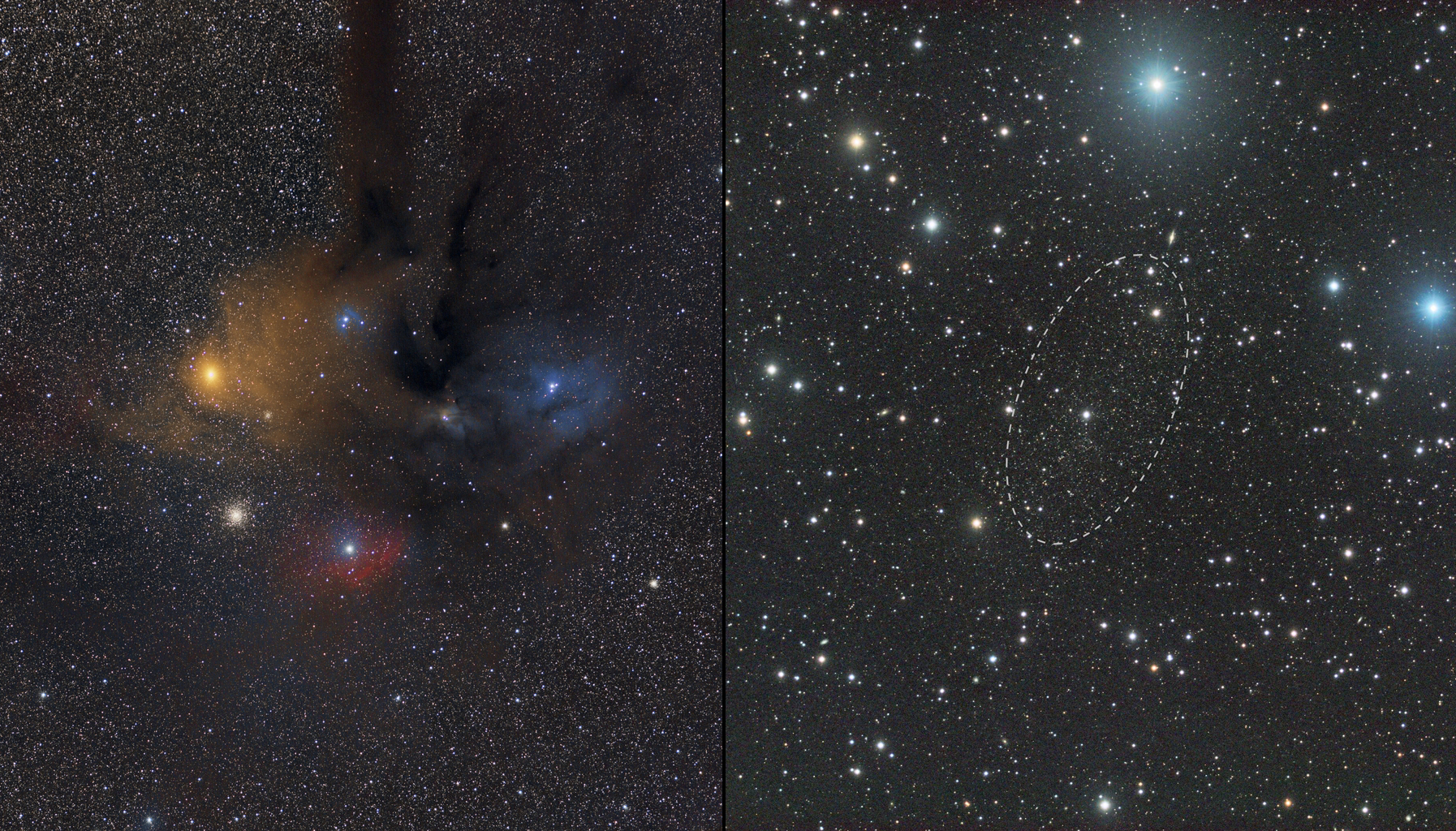 17.5. Two observations from southern lands. On the left, an image by Otto Vehviläinen from the area of Antares and Rho Ophiuchi "in completely dark sky" in Madeira. On the right, UGC 9749, or Ursa Minor Dwarf Galaxy, photographed by Tapio Lahtinen with Spanish remote telescope in the Fregenal de la Sierra. "I've photographed some of these Milky Way dwarf galaxies, and now in the spring I saw a picture of this rather challenging galaxy online," Lahtinen explains the background for his photo.

Deep Sky category in May »

Lightning in Nurmes started the season 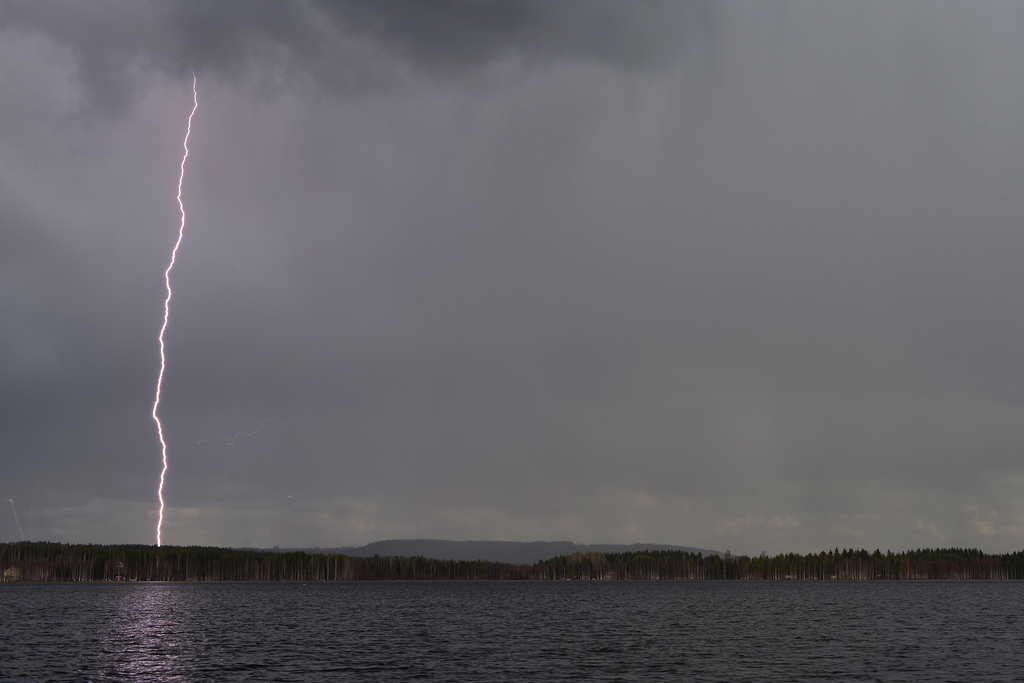 16.5. The first lightning strikes in the spring were reported to Skywarden on Sunday, when Eero Karvinen got a few pictures in Nurmes. Coincidentally, 15 May was also the first lightning day last year in Warden. Of course, lightning has been seen much earlier in some years, even in January. These are caught on film much less often, but the lightning that took place on 13 January 2012 in Mikkeli was captured by Aki Taavitsainen's fireball camera.

Recent events in the lower atmosphere 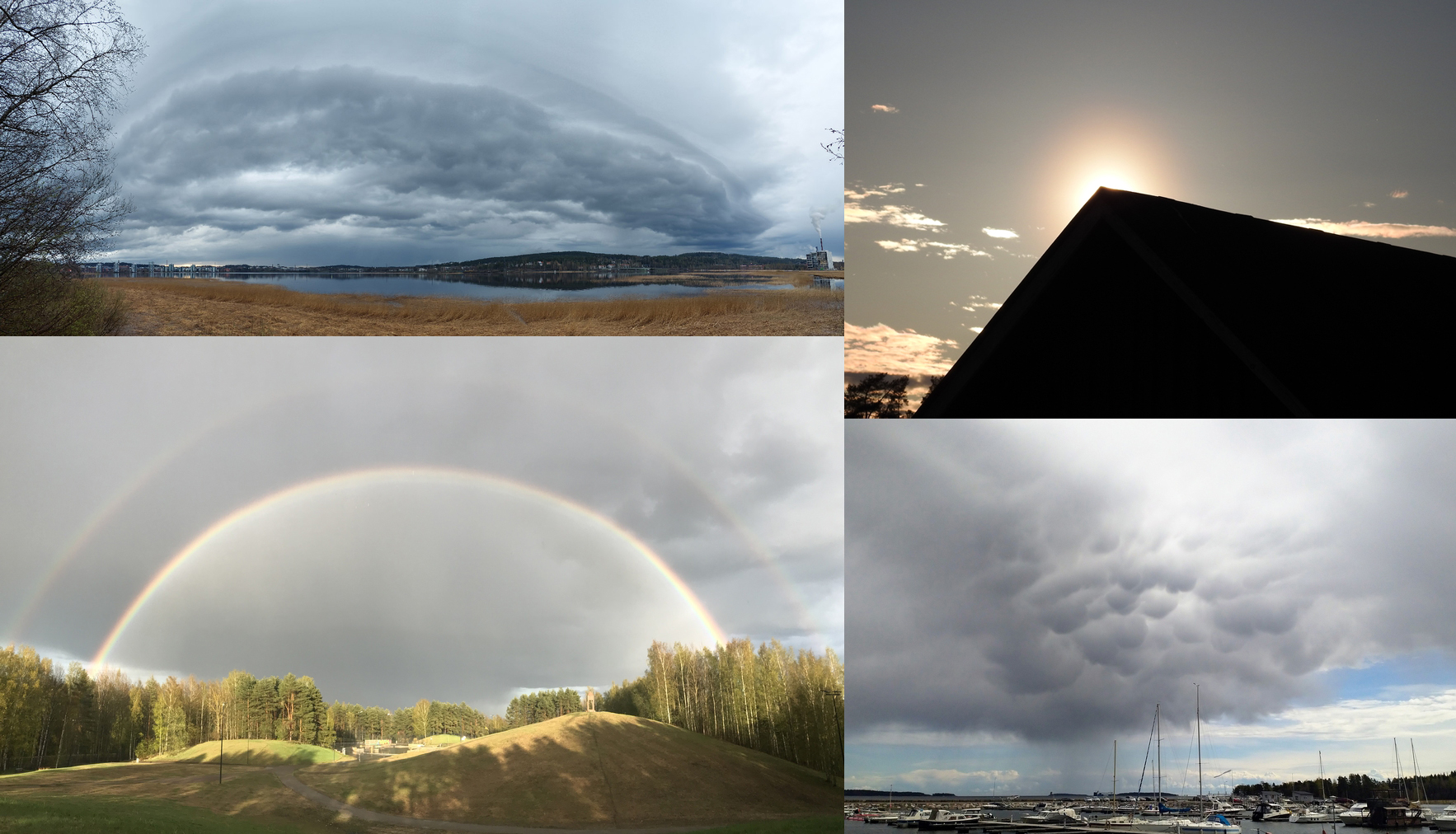 14.5 . The birch pollen corona photographed by Petri Martikainen in Juva on the 13th is the summer's first from this tree. On the same day, Kati Pursiainen noticed a fine mammatus in Helsinki, where also a first-class rainbow was visible. This observation was left by Terhi Hirviniemi, who says the picture was taken by her child. And the day before, Antero Ahola reported the season's first roll cloud to Taivaanvahti at the bird tower in Jyväskylä. 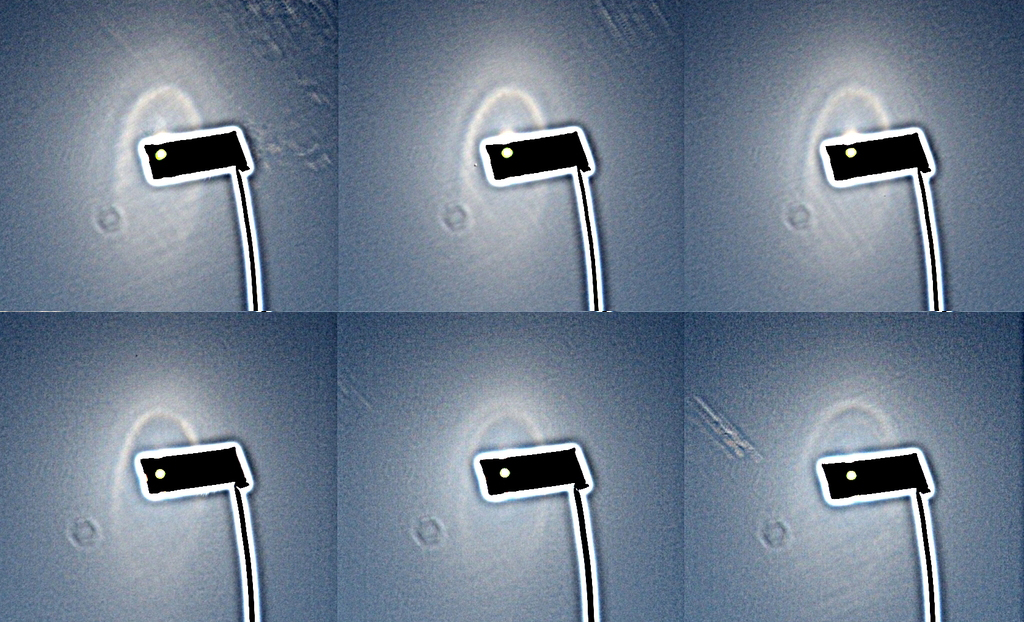 10.5. A long-awaited high-quality time-lapse of an elliptical halo occurrence has finally been obtained, thanks to the pictures taken by Petri Martikainen in Juva yesterday. The pictures show how the display lives continuously: the size of the ellipse changes and sometimes two of them appear. Of course, we have seen indications of such behaviour before. But now the blocker series Martikainen took made it possible for the first time to accurately align the images with respect to the Sun and thus allow follow in much more detail the evolution of the display.

Nebulas in the Orion constellation 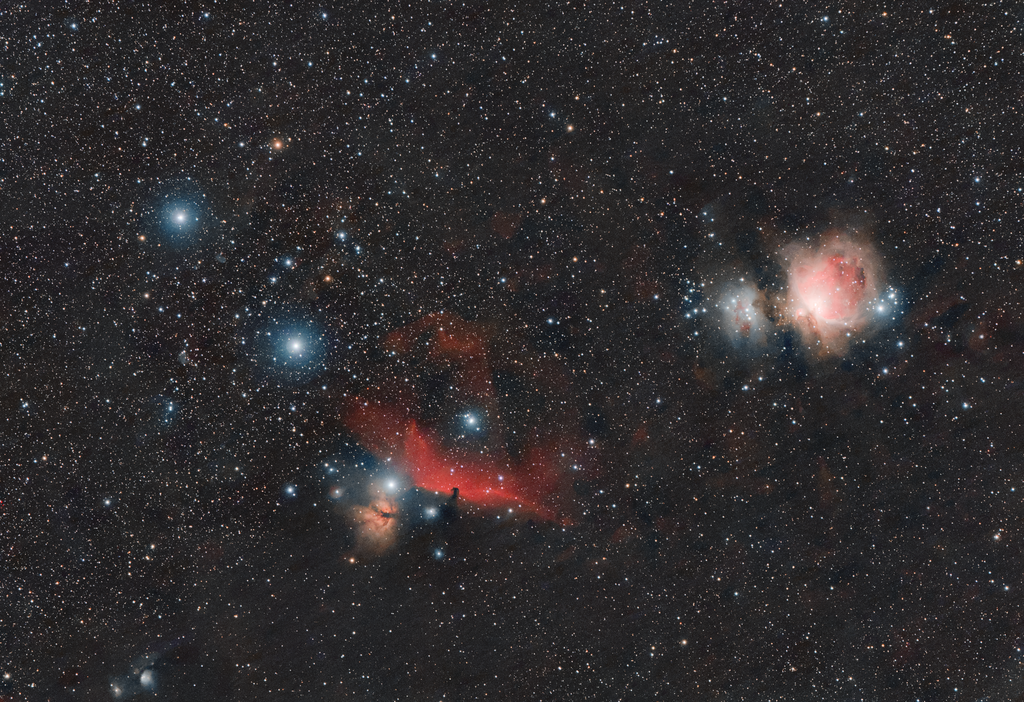 5.5. Orion's area is featured in this picture by Eemil Pietilä, to which he added on top of an earlier data a couple of hours more exposure in April. "Actually, the results of those nights in the beginning of April were the most surprising, I didn't expect them to add much more to the picture," Pietilä writes. Three bright stars mark Orion's belt. In the vicinity of the lowest Alnitak you can see the Flame Nebula and the Horsehead Nebula. On the right is Orion's the Orion nebula M42.

Mercury and the Moon close together 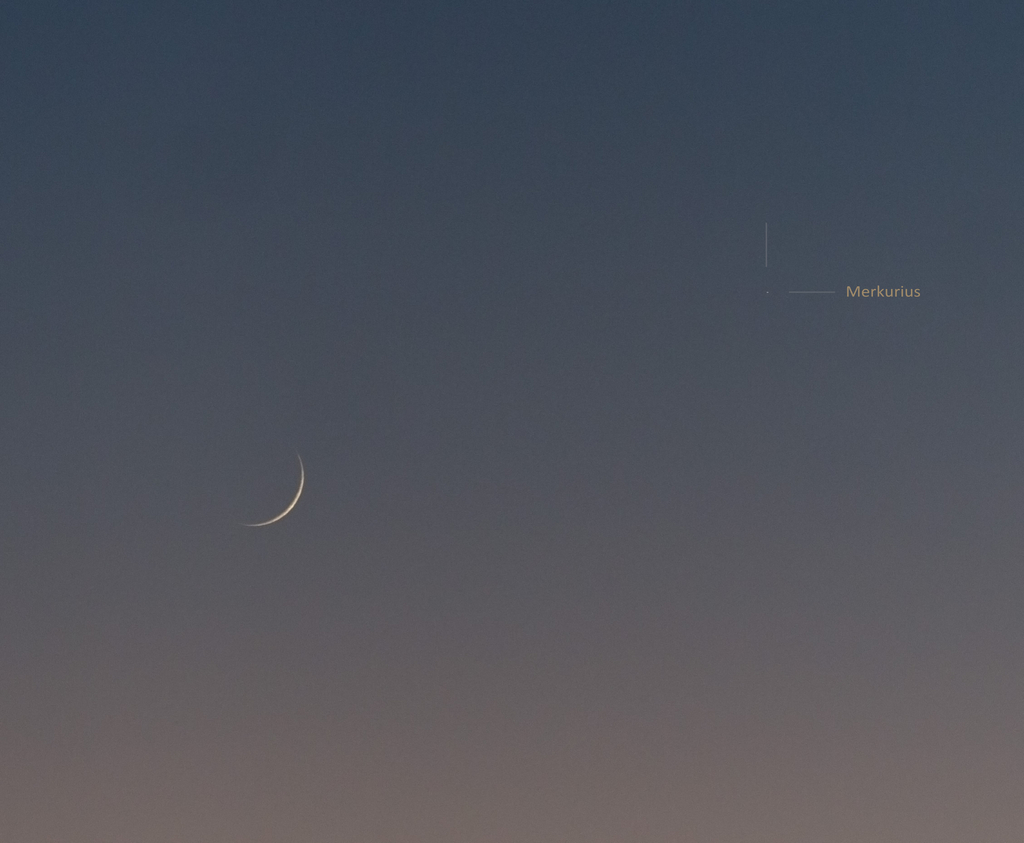 3.5. The encounter between Mercury and the Moon seen yesterday has made a few observations in Skywarden. Tapio Lahtinen took the picture at 22:20 at the Tampere Ursa Observatory, where a small group had gathered to watch the event. The celestial bodies were about 2.5 degrees apart.

Observations of the encounter » 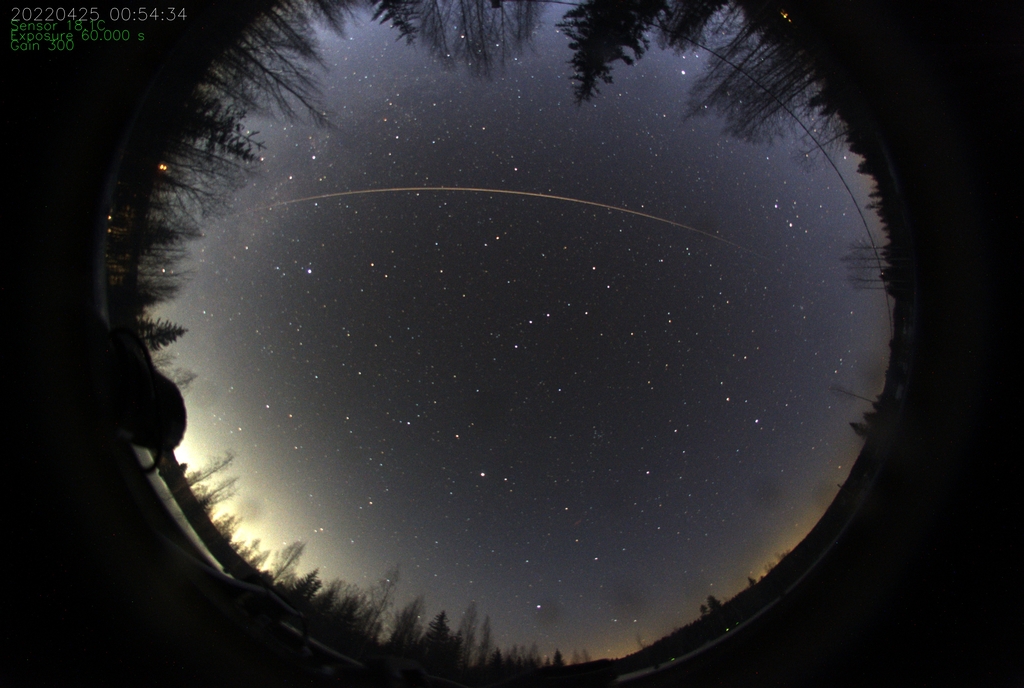 2.5. According to the analysis, the fireball that appeared near midnight on April 25 at 00.54 has apparently been space debris, comments Markku Siljama from Ursa's fireball team. According to eyewitness observations, the subject disintegrated into several parts, in one video its slow passage takes about 15 seconds. "It came from the west, hit the atmosphere around Seinäjoki and bounced back into space around Pieksämäki," writes Siljama, who said that space debris had a speed of more than 8 km / s. The picture is from Harri Kiiskinen.