Mars approaches the opposition when the Moon covers it 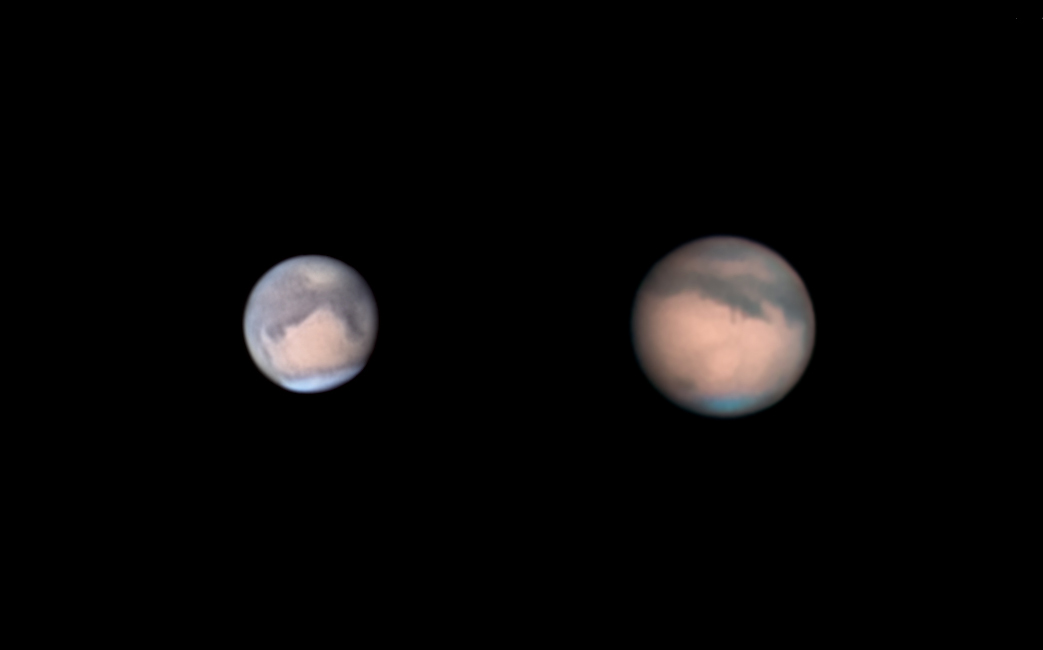 25.11. There are again good chances to spot Mars when it is closest to Earth on 12/12 and 8/12. in opposition. Here are two recent pictures, on the left from Lasse Ekblom on 18.11., on the right from Antti Taskinen on 23.11. In opposition, Mars also hides behind the Moon in the morning. The event can be seen everywhere in Finland.

Auroral arc in pictures on Sunday 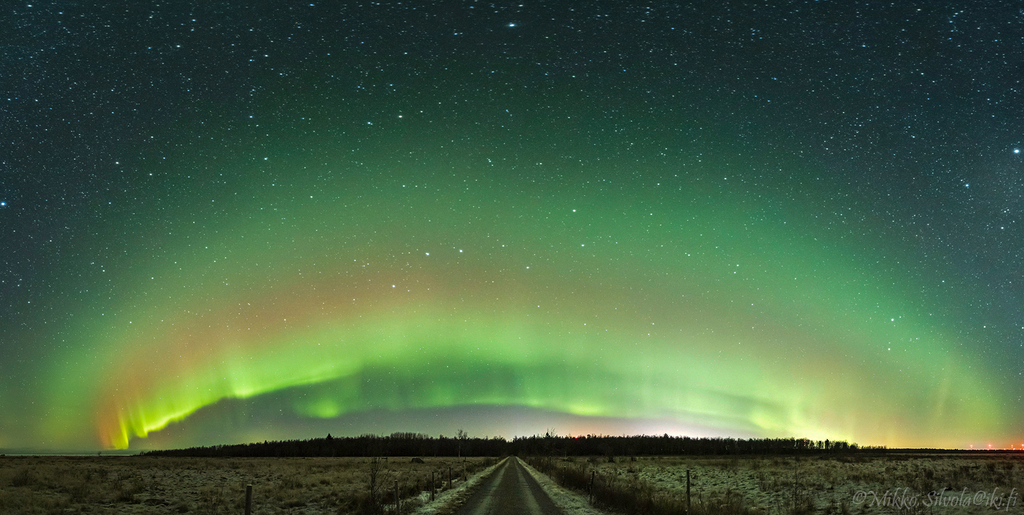 22.11. On Sunday the aurora borealis didn't offer a big show, but Mikko Silvola arranged the landscape elements in Pyhäjoki to get an atmospheric picture of a peaceful auroral arc. A finalizing touch is given by The Big Dipper which, as Silvola writes, is suitably positioned at end of the road. Another version of same subject, by Tommy Lågland on the seashore in Kokkola, is not bad either. 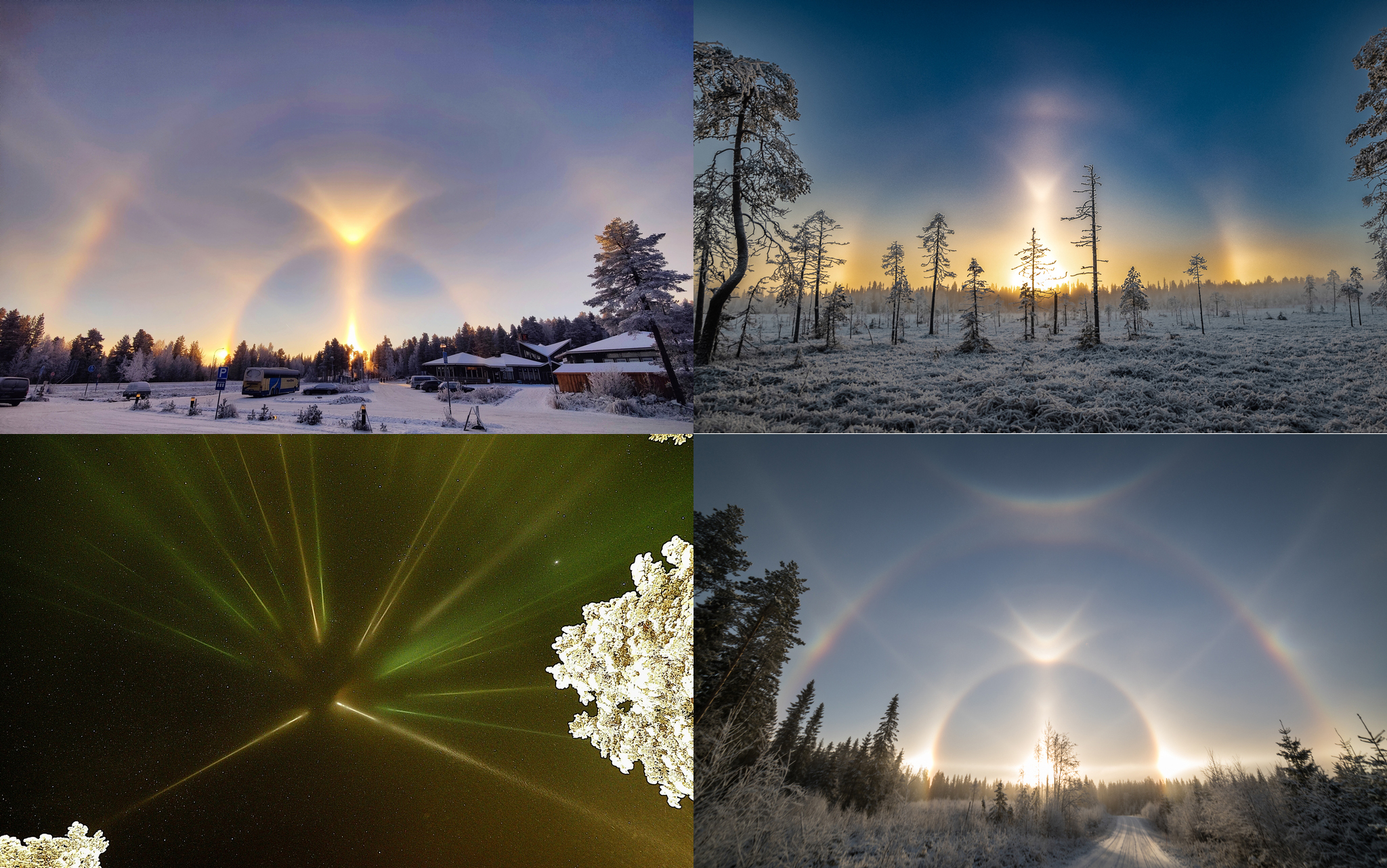 20.11. Sturdy diamond dust shows were on the offing in different parts of Finland on Sunday. The view on the top left was captured by Anne Niemistö at Pelkosenniemi, next to it is a shot by Esa Pekka Isomursu from Pudasjärvi, below is a photo by Jouni Kiimalainen from Kuopio. On the lower left are pillars from the outdoor lights in Muinio the night before, photographed by Erkki Koski-Lammi  Freezing weather in high pressure conditions will continue, so diamond dust halos may well be seen in the coming days.

The best ice fogs of winter »

The Leonid maximum is at hand 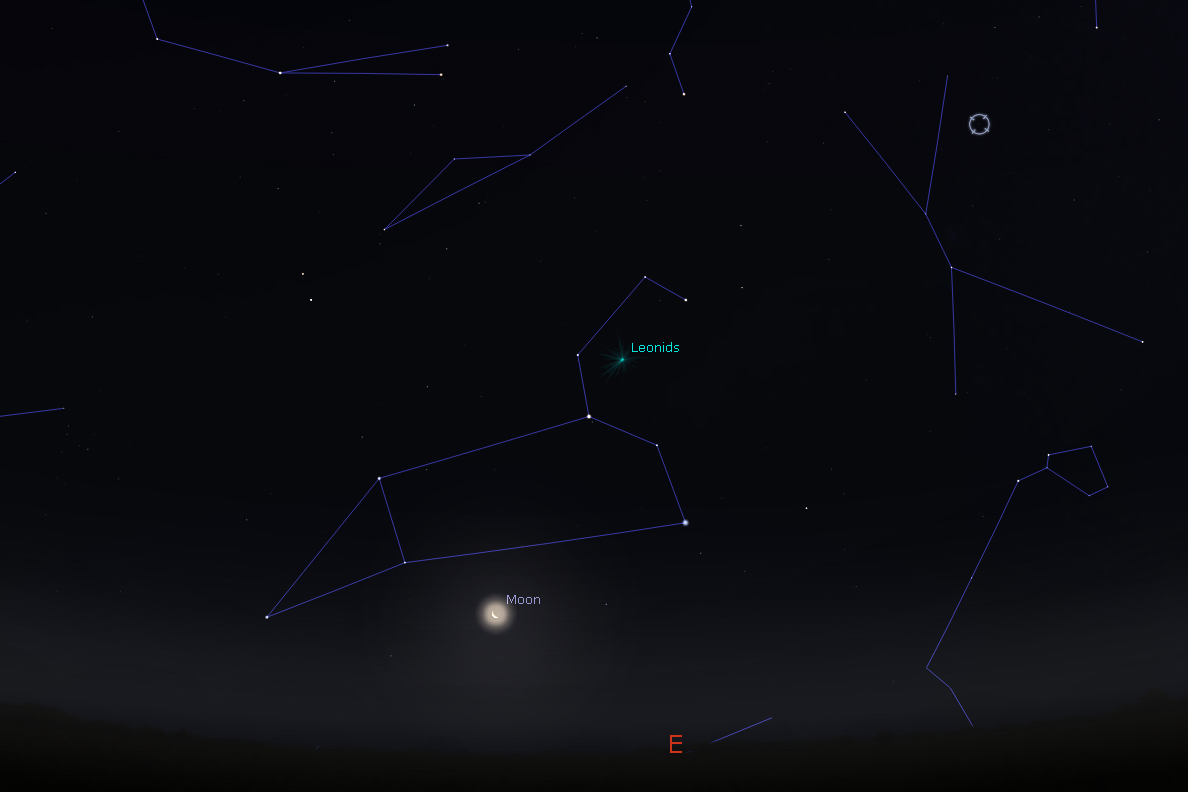 16.11. The normal maximum of the Leonid shooting stars is predicted at 01-02 Finnish time on 18 Nov. Numerous other peaks have also been calculated. 19 Nov. at 8:00-8:30 the most numerous Leonids may be seen. Two weaker maxima are predicted for 18 Nov at 9 and 21 Nov at 17. Of course, these times are not the best for spotting in Finland, but predictions are never certain. In Utsjoki, the radiant is above the horizon around the clock, in Helsinki after 21:33 . (photo Stellarium) 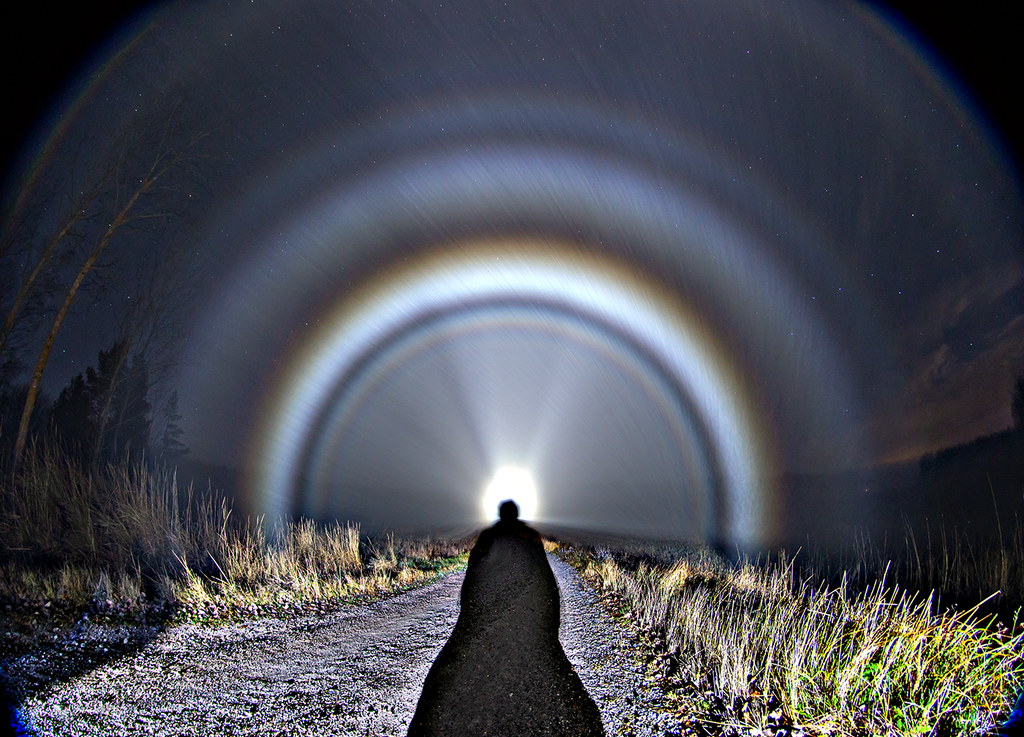 14.11. On Sunday evening, Lasse Nurminen lit a bright lamp in Masku in the fog and went into the spotlight with camera. The picture taken towards the opposite direction of the lamp shows primary and secondary fogbows with interference arcs on both. "The most spectacular case for me," says Nurminen. There was still room for improvement, though, because the photographer says he left the turbo power of the lamp unused, which would have further strengthened the contrast of the phenomenon against the background. 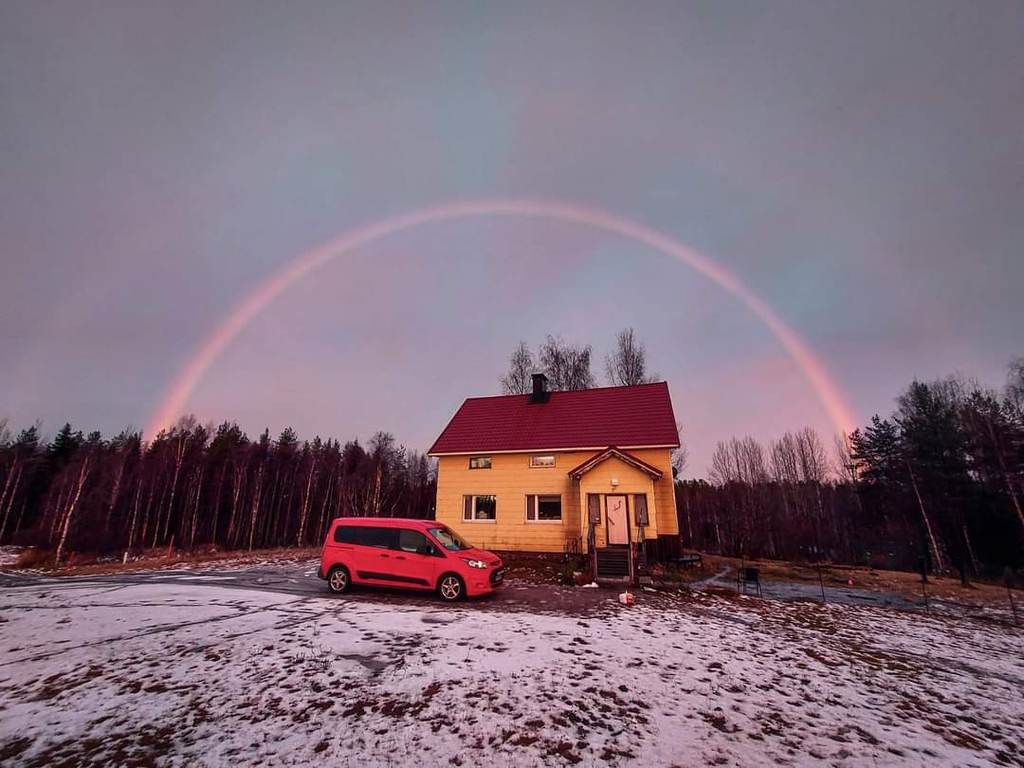 13.11. Although Rainbows in November are not yet a great rarity, the snowy foreground is an unusual prop for the phenomenon. The photo was taken by Sari Tammela in Sonka, Rovaniemi. According to Vahti's statistics, rainbows have been now seen on 22 days in the last 12 years in November. In December and January the numbers are already half as low, and February is even scarcer with only five sightings. 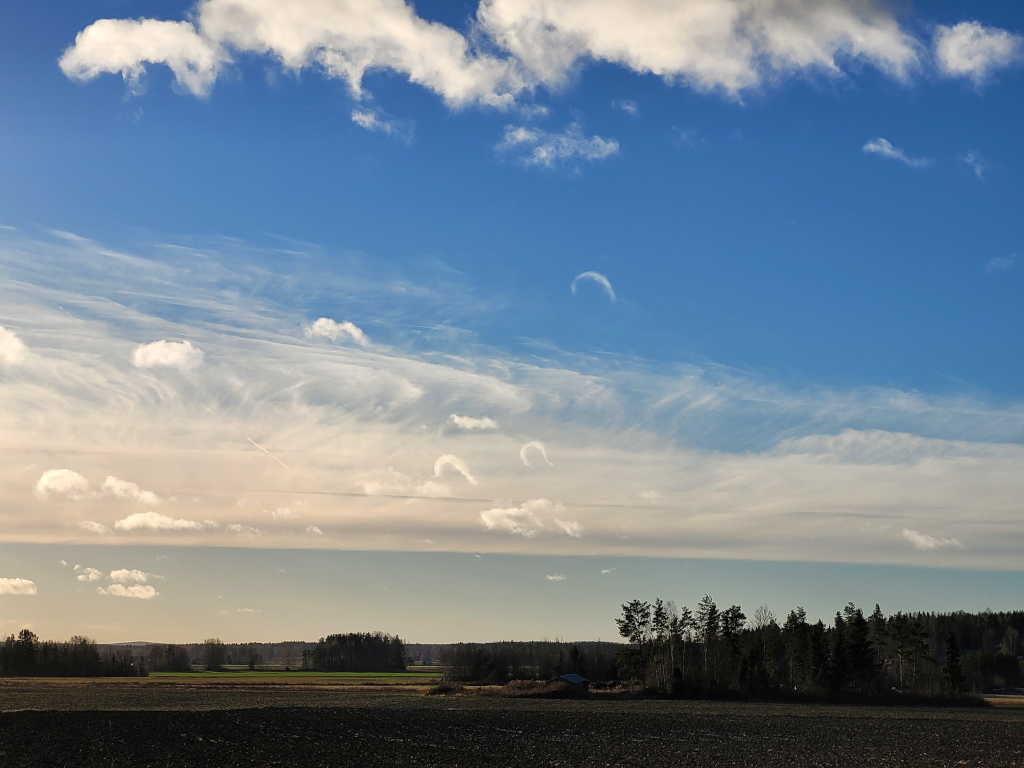 13.11. On Saturday, the conditions favored horseshoes twisted from the clouds at Ilmajoki. Mauri Korpi first noticed a few individual horseshoe clouds, but eventually there were as many as three of them in the sky at once. The camera must not be far away when the horseshoe vortex hits as they are very short-lived.

Half a dozen fireballs on 12-13 Nov night

13.11 . There were an exceptional number of sightings of fireballs on Sat-Sun night. Cameras caught them at 1906, 2025, 2338, 0047, 0553, and apart from a single report at 0313, visual observations agree with these times well. This was the maximum night of the northern Taurids, known for its fireballs, so at least some may have belonged to the meteor shower although no connection has been brought up in any observations. The animation, from Timo Kantola, shows flight of the night's first fireball. 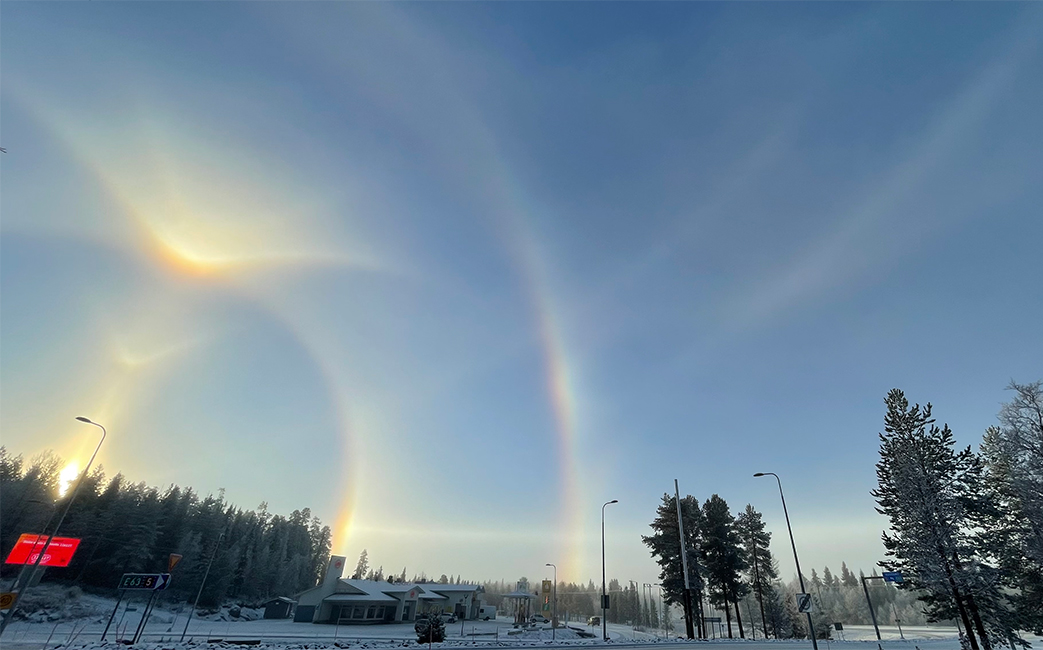 8.11. So far, there have only been reports from Jani Päiväniemi from Ruka. The first diamond dust halos were visible from the slope lights on the morning of November 1. Another sighting from Päiväniemi is from 7/8 November night, when the halos kept company not only with the lamps but also with the Moon. Now the weather is taking a warmer turn to such an extent that even in the north no diamond dusts can be expected for several days. Update: A great solar halo occurred in Ruka on 8 Nov, a fresh image from Päiväniemi has been changed. 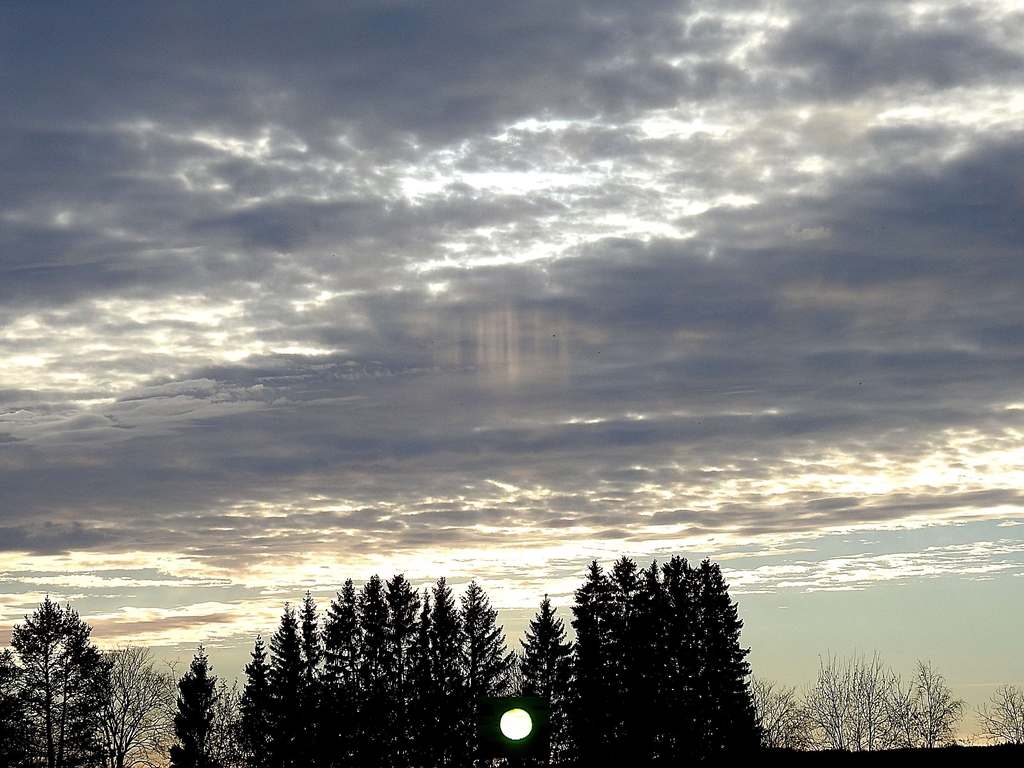 1.11. For the first time, a time series has been obtained of a slivered reflection sub-sun. From the material recorded in Juva by Petri Martikainen, it becomes clear how part of the phenomenon is replaced by a shadow as the Sun moves on. "The reflection paints on the sky an accurate picture of the lake landscape", writes Martikainen. Stripes occur in an area larger than the sun's disc, which means that the water was not dead calm. The phenomenon was visible relatively long, about 25 minutes.

IC 5146 in Cygnus with dark nebulas 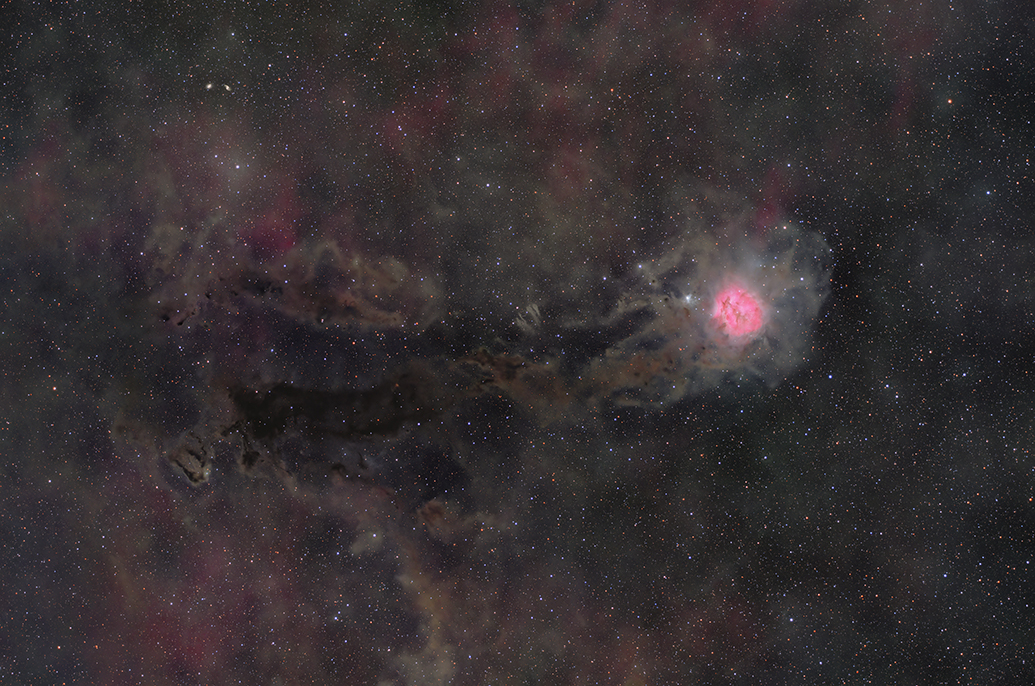 28.10. Samuli Vuorinen has used autumn's meagre weather windows to gather 10 hours of light from the Cocoon nebula, IC 5146, in Cygnus. "Often, only the bright red emission nebula is shown, but with such a wide field of view, there was also a lot of surrounding dark nebula, which cannot be seen unless you expose the object for a very long time," says Vuorinen.

Observations of IC 5146 in Skywarden »

More fireballs in the coming weeks 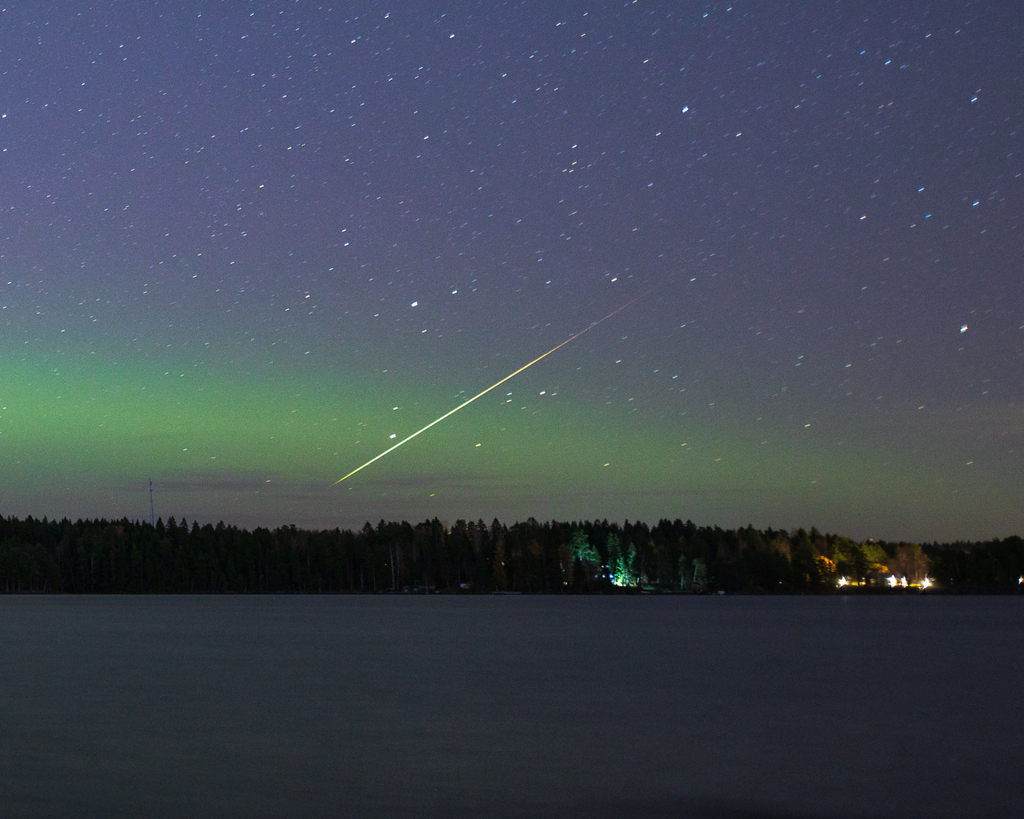 26.10. The southern and northern Taurid meteor showers, known for their fireballs, are now active at the same time, thus adding up. In addition, the Taurides may have a now every seven-year increase in activity. At least in 2008 and 2015 significantly more fireballs were observed from the swarm. Taurides are visible until the beginning of December and do not have a clearly distinguishable maximum. Photo by Jari Luomanen. 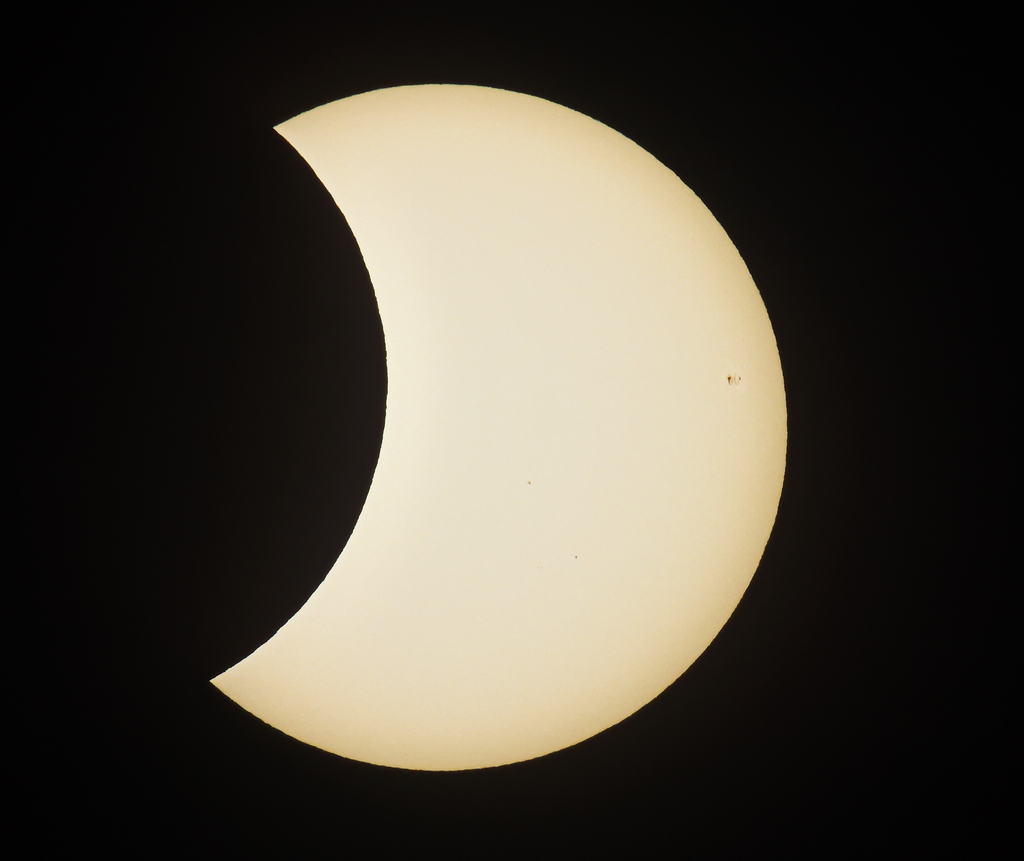 25.10. monitoring of the partial solar eclipse that took place was best in the central and northern parts of Finland. In southern Finland, the view of the phenomenon was hampered by a strong cloud cover and rain. Observations about the event are collected using the blackout form . In a successful bonga, the title is chosen Partial solar eclipse . Those caught under the clouds can record a negative observation under the title Maximum eclipse behind the clouds . Photo: Pentti Ketola 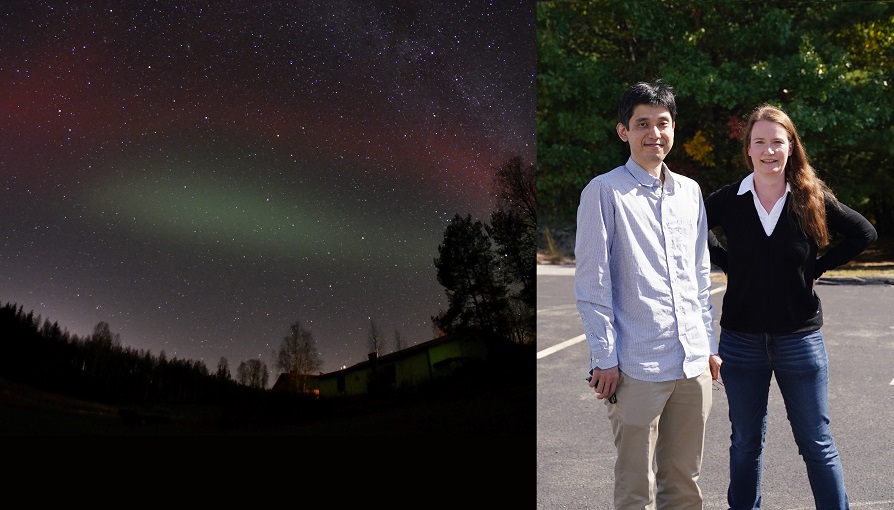 24.10. The sky watcher's observations have led to the discovery of a new form of aurora borealis. Red Arc with Diffuse Aurora (RAGDA) was published as a scientific study in the journal JGR Space Physics. In Finland, the new phenomenon is told in Tähdet ja väjä 7/2022. In the initial phase of the research, more than 70 Sky Watch observations were included. When searching for an explanation of the phenomenon, the observations were compared with the data of the researchers' satellite and terrestrial measuring devices. At this point, there were two Skywatch observations and one observation from Canada. In the picture, on the left, RAGDA: On the right, Professor Toshi Nishimura from Boston University and Skywatch developer Emma Bruus. Photos by Heidi Rikala and Carlos Martinis / Stars and space 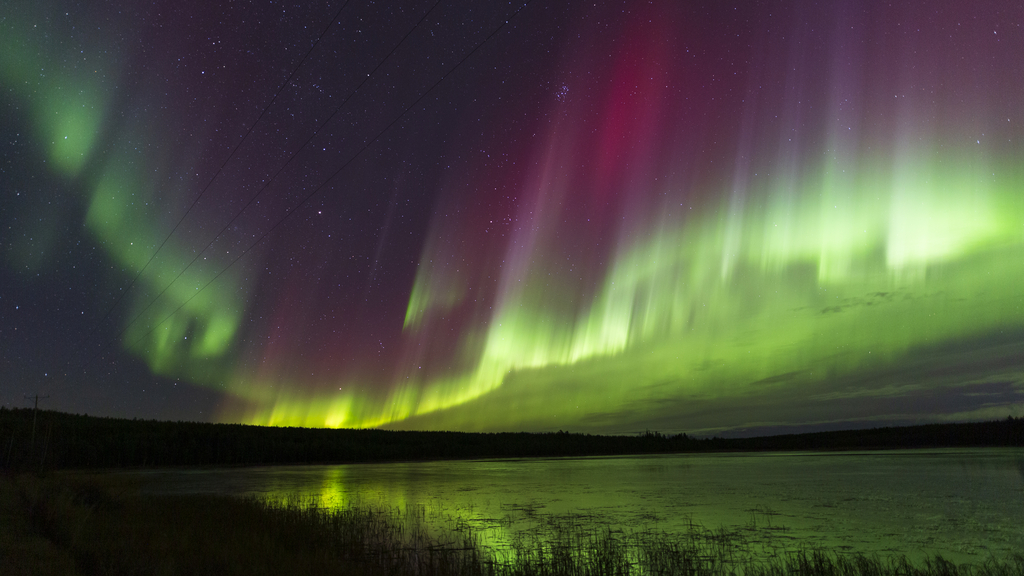 23.10. On the night between Saturday and Sunday, the northern lights were filmed across the length of the country. Aino Piirainen was on the alert in Rovaniemi in the evening and recorded, as the photo shows, impressive sights. That same night in Utsjoki, Tiina Salonen's video caught a fireball with a strong flash. Elina Penttinen's camera also recorded this in Rovaniemi.

Orionids in the sky 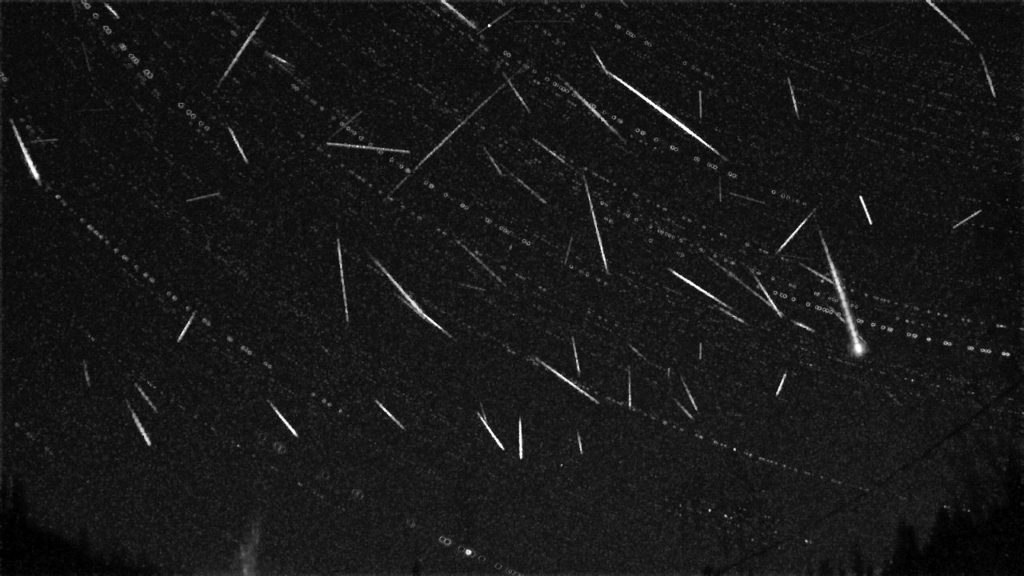 21.10. The picture show meteors from Harri Kiiskinen's meteor camera on the night of 19/20 Oct when the sky only cleared in the morning. "Taking into account the observation times, the camera recorded 7.6 meteors/h on the night between 19-20.10, while the previous night between 18-19.10 there were 3.8 meteors/h," says Kiiskinen. The maximum of the Orionids meteor shower is on Friday 21.10. at 20 Finnish time, but better opportunities for observations are later at night when the radiant is higher. 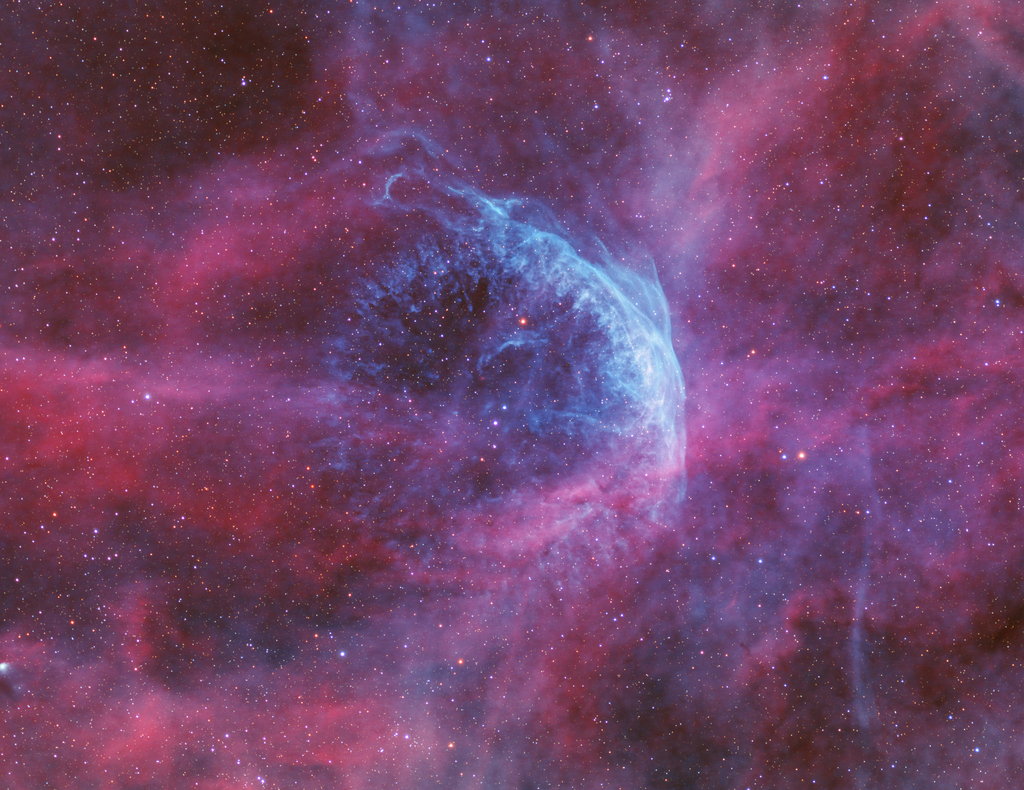 17.10. Rare gems of the deep sky are available again, this time in the form of Jarkko Järvinen's publication. It is the nebula blown by the star WR 134 in Cygnus. Järvinen says he photographed the object for 36 hours. "A total of 12 Gigabytes of data was accumulated, so it took a while to process," he writes. There are only two previous observations of WR 134 in Warden, by Tapio Lahtinen and Erik Pirtala . 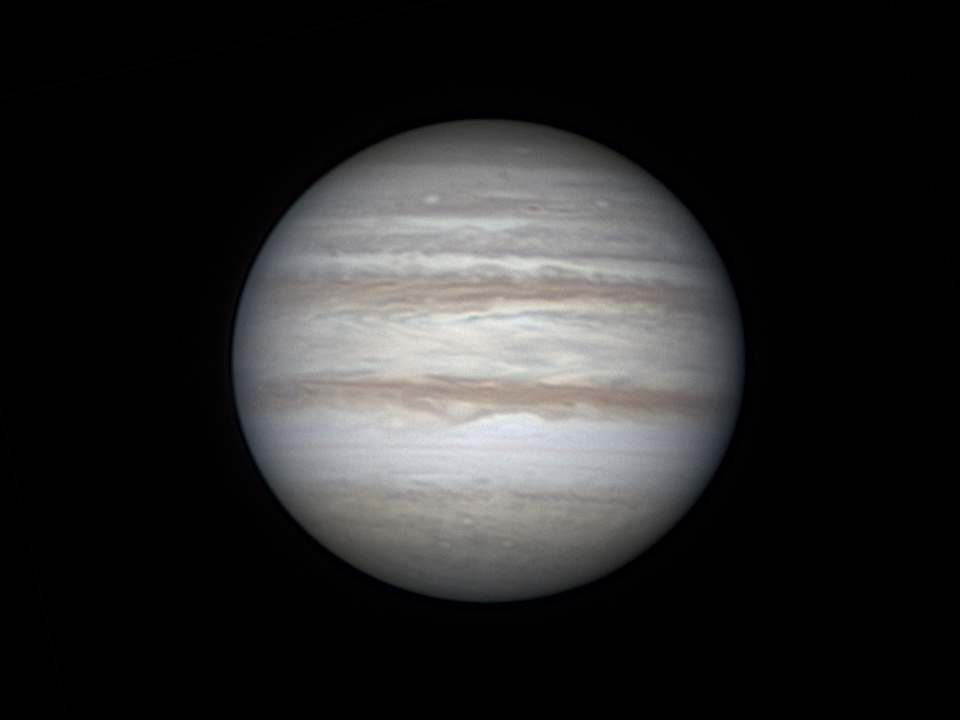 14.10. Jerry Jantunen hasn't been impressed by the conditions for planetary photography this fall, but yesterday "unsually good weather" arrived. While normally Jantunen has managed to stack at most 30% of the video frames, now the seeing in Helsinki was so auspicious that he could use a whopping 90% of the 6700 frames. The result is a sharp Jupiter that also allowed publication in an exceptionally high resolution.

Jupiter observations from the first half of October » 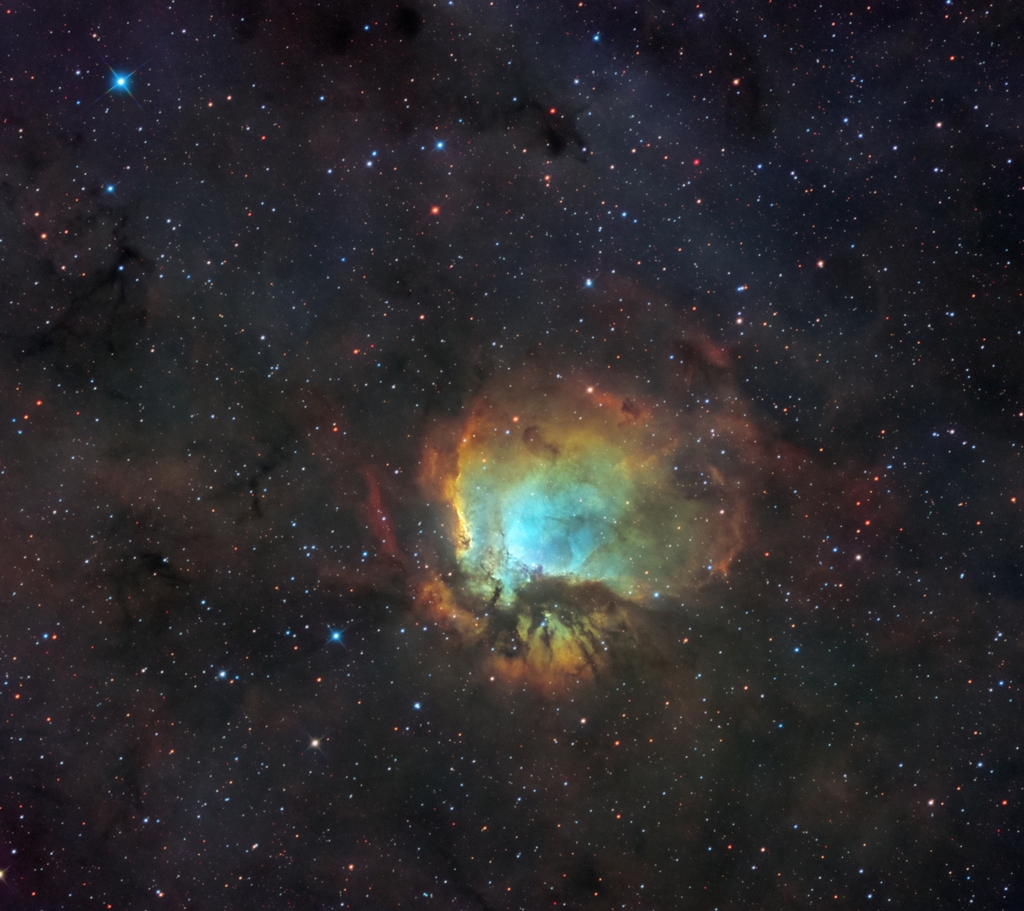 12.10. Erik Pirtala started photographing the Sh2-112, that is located next to Joutsene's head, last spring and continued the work again when the skies darkened in the fall. He says that the 20-hour exposure image is combined data from three telescopes. This is a less frequently visited object. In fact, Pirtala's take on it is the first in Taivaanvahti.

A multiple corona in the sky of Joensuu 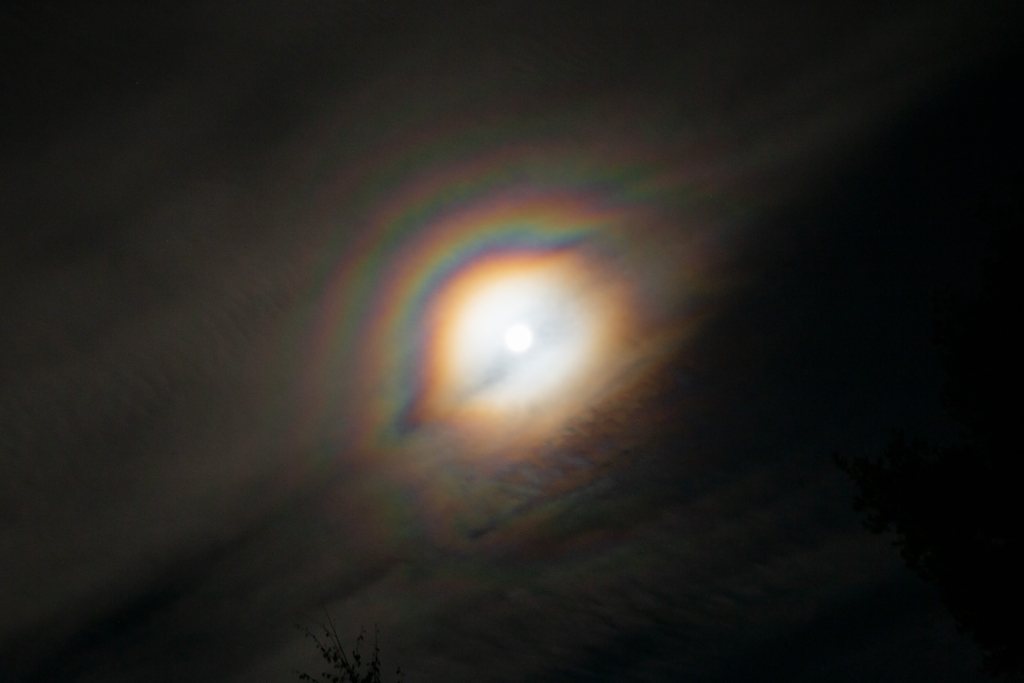 12.10. Antti Taskinen photographed spectacular corona ring formations around the Moon in Joensuu on Monday's first hour. Taskinen notes that although usually the appearance of clouds in the sky in the middle of an observation session mostly causes negative feelings, this time the corona formed by them was perhaps the night's best offering. Multiple rings are formed when cloud-droplets are roughly the same size. The two additional images in Taskinen's observation show the changing nature of the phenomenon.