A successful halo trip to Jämsä 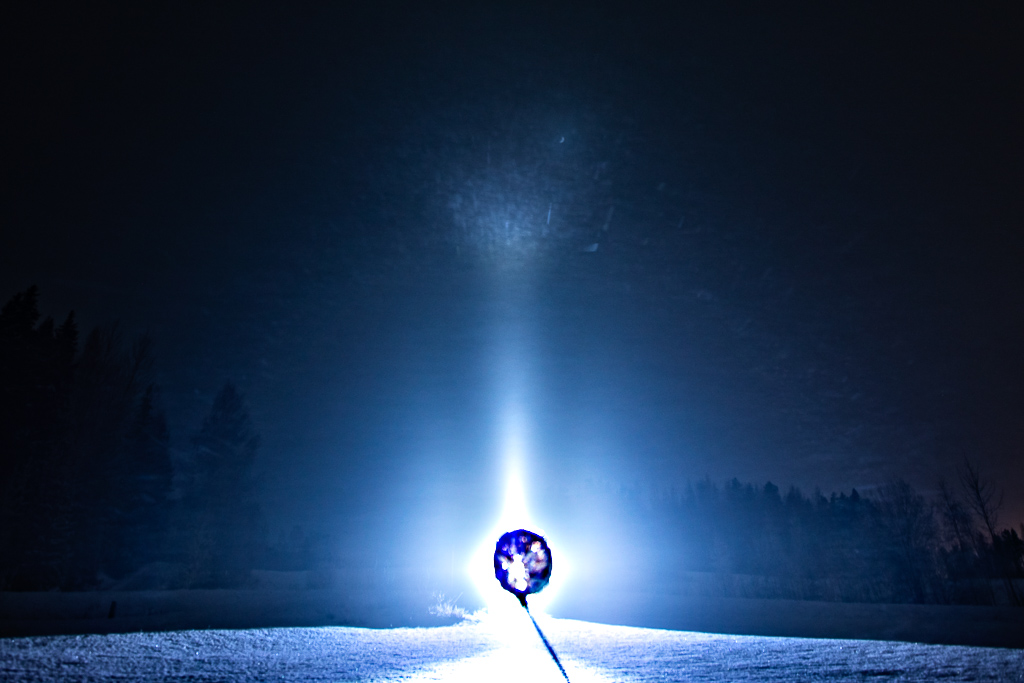 30.1. Jari Luomanen, who drove to Jämsä to hunt diamond dust halos from snow guns, returned with an exceptional catch. In the lamp beam an odd form in resemblance of angel wings appeared flanking the pillar. It bears similarity to "sun pillar echoes", a halo of an unknown origin based only on two previous observations. In addition, in some of the other Luomanen's images the 22° ring would seem to be surrounded by a weird upward tapering arc.

Comet ZTF is visible barely with the naked eye 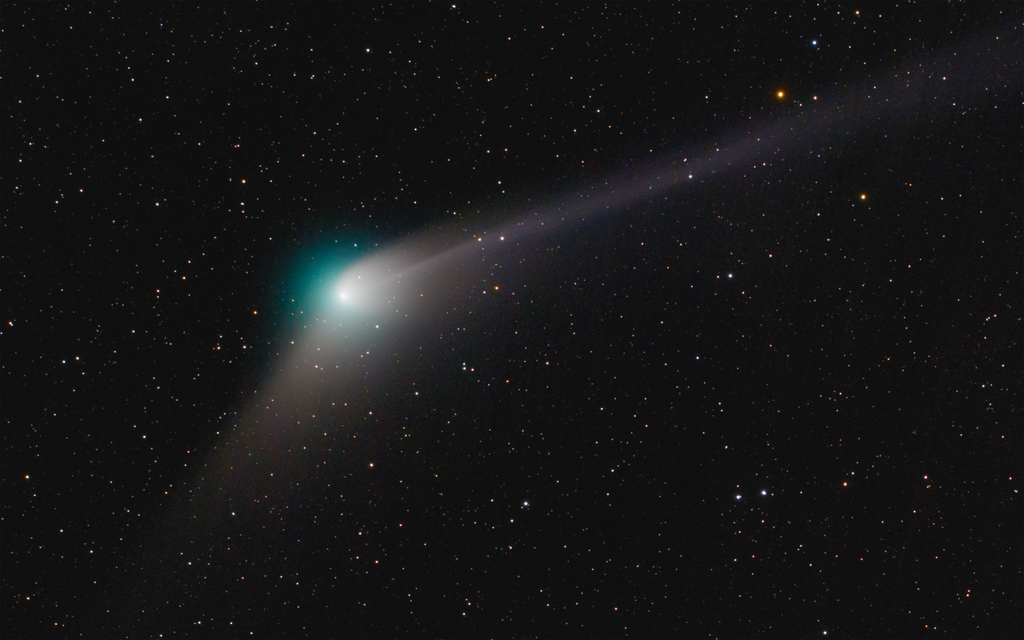 29.1 . Ten observers have reported C/2022 E3 (ZTF) in the "head of the comet with the naked eye" category. "With eyes the comet's head stood out with difficulty after a long time of adaptation," says Aleksi Ruotsila from Äänekoski (photo). The comet may still brighten, but the best viewing window is closing due to the Moon. In the next two nights, the Moon will set in southern Finland while the sky is still completely dark, but after this it will disturb the whole night.

A good period of PSCs going on 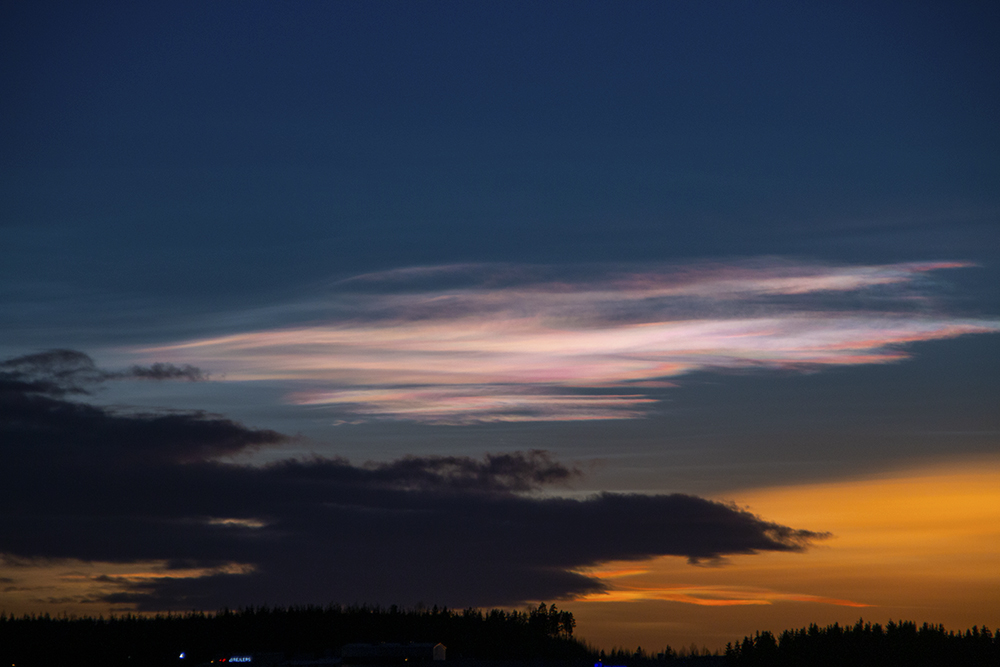 29.1. The nacreous clouds seen on Saturday were already the sixth consecutive day since the streak began on January 23. As such, it is typical for PSCs to appear consecutively. The longest continuous period in Finland can be found from 2012, when they were seen in December for 10 days straight. The next longest unbroken records are the six days long, during the mighty PSC winter of 2019-20 there were no less than three of them. Pictured are the PSCs in Kurikka on 28 Jan, photographed by Marko Myllyniemi .

Comet ZTF is starting to hit its prime 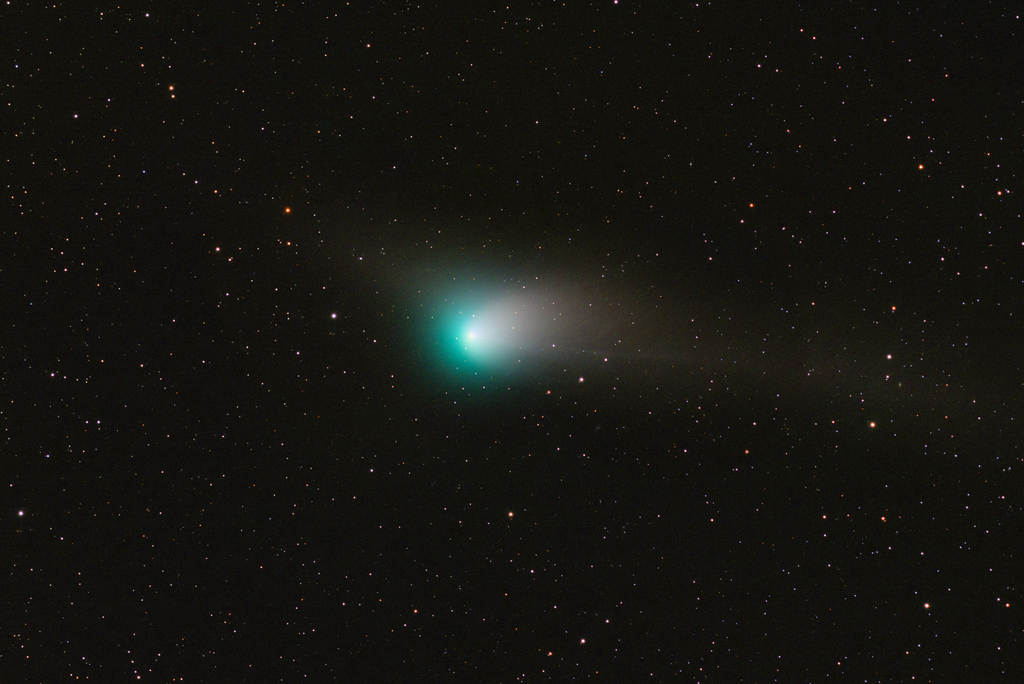 24.1. Comet C/2022 E3 (ZTF) is approaching its predicted maximum brightness. Based on the observations, the object is now at magnitude 5.5, and forecasts suggest that it will increase by about one magnitude by the end of the month. In principle, in good conditions, it could already be seen with the naked eye. The comet can be found in the constellation Dragon near the star Edasich and will be above the horizon in Finland throughout the night. The best time is before dawn, when it is near the zenith and the growing Moon has sunk behind the horizon. The picture was taken by Ville Puoskari on 21.1. 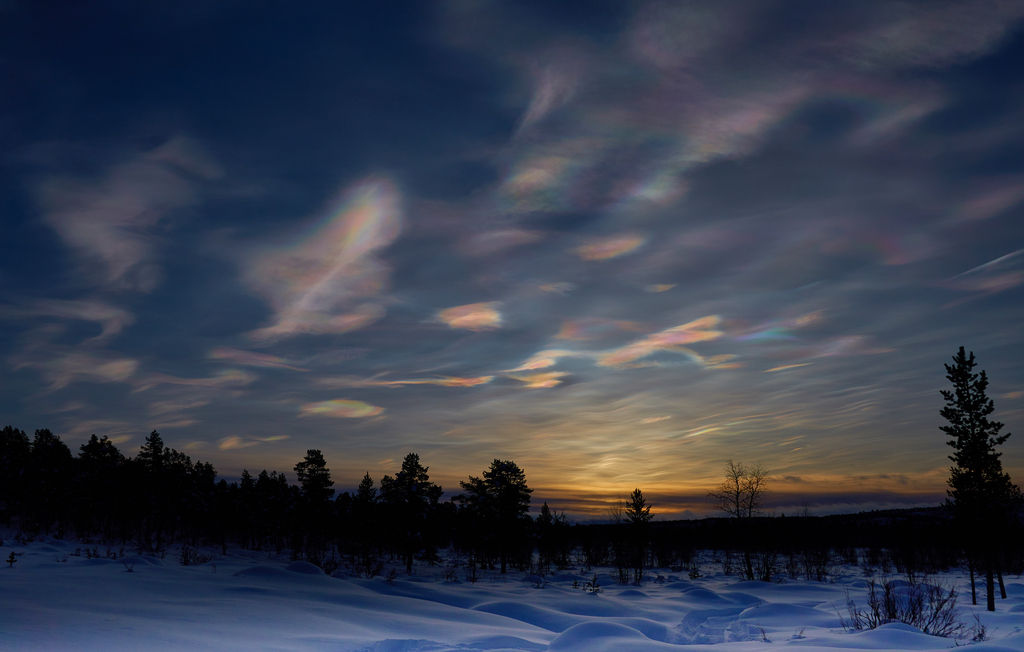 24.1. The winter has been subdued what comes to polar stratospheric clouds, but now there are pictures from Lapland of a quality show on Monday. "For a couple of days I had been waiting for mother of pearls while walking with my camera, but they still came as a surprise when I saw a glowing cloud from the window," writes Tarja Kouvo from Karigasniemi, who took the attached photo. Two other observations are from Kilpisjärvi and Kittilä.

No fireball without smoke 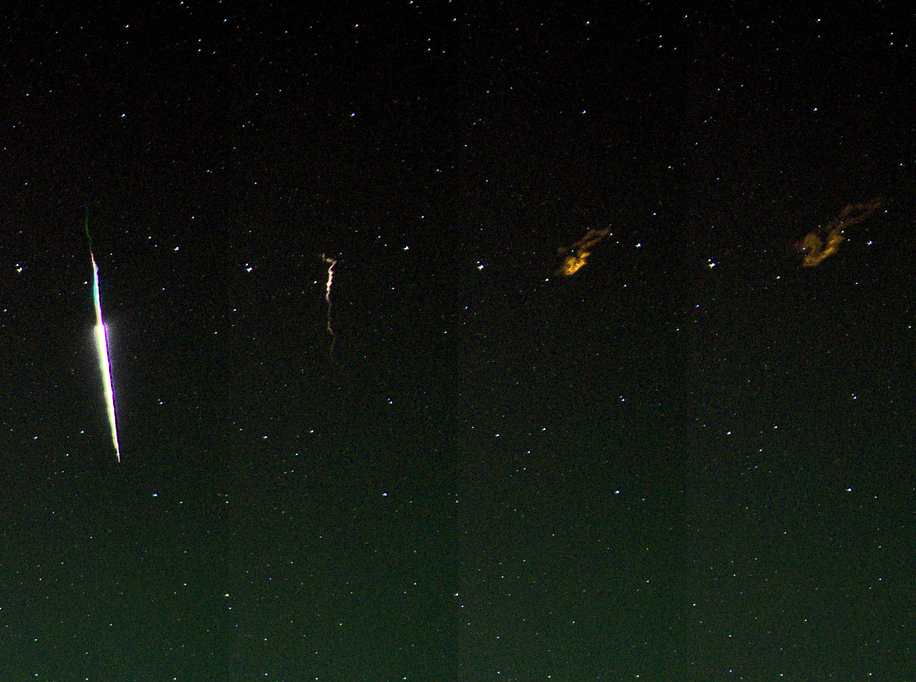 23.1. On the Swedish side of Abisko, the camera left to film the northern lights recorded 19 Jan a fireball that left behind a smoke-trail. The collase shows the first four frames. Photographer Niko Keurulainen also compiled a video from the photos, you can watch it in the observation he left. 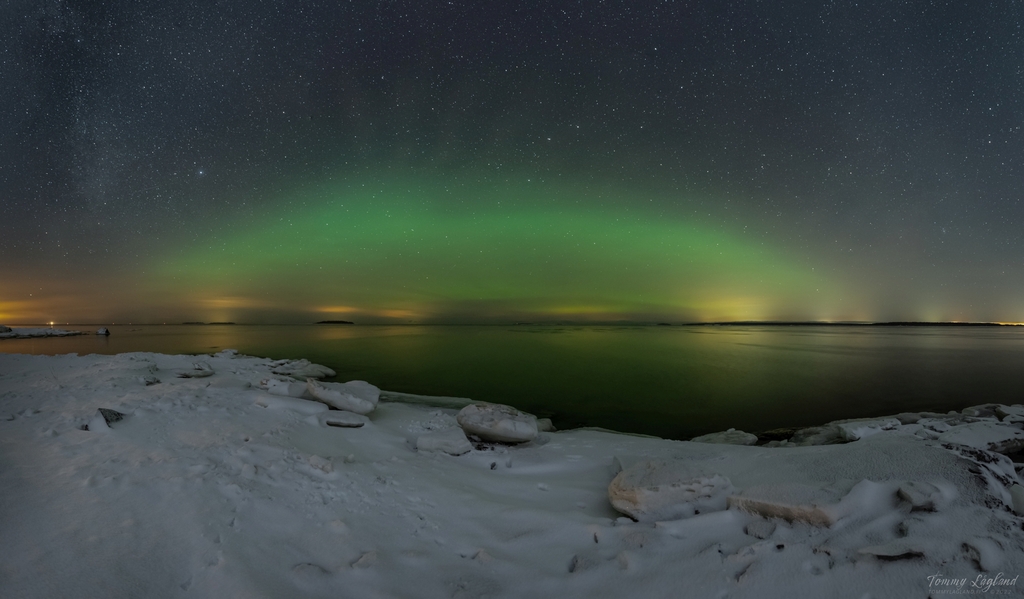 23.1. On Saturday evening, Tommy Lågland (photo) and Sami Mutka photographed an auroral arc above which ghostly streaks can be seen. The phenomenon can be explained by airglow or a rare form of aurora called the dunes. In this case, the interpretation leaned towards the former. "The line between the two is sometimes difficult and the air glow can appear as wave-like at the same time as the dunes," explains Eero Karvinen in the comment on Mutka's observation. 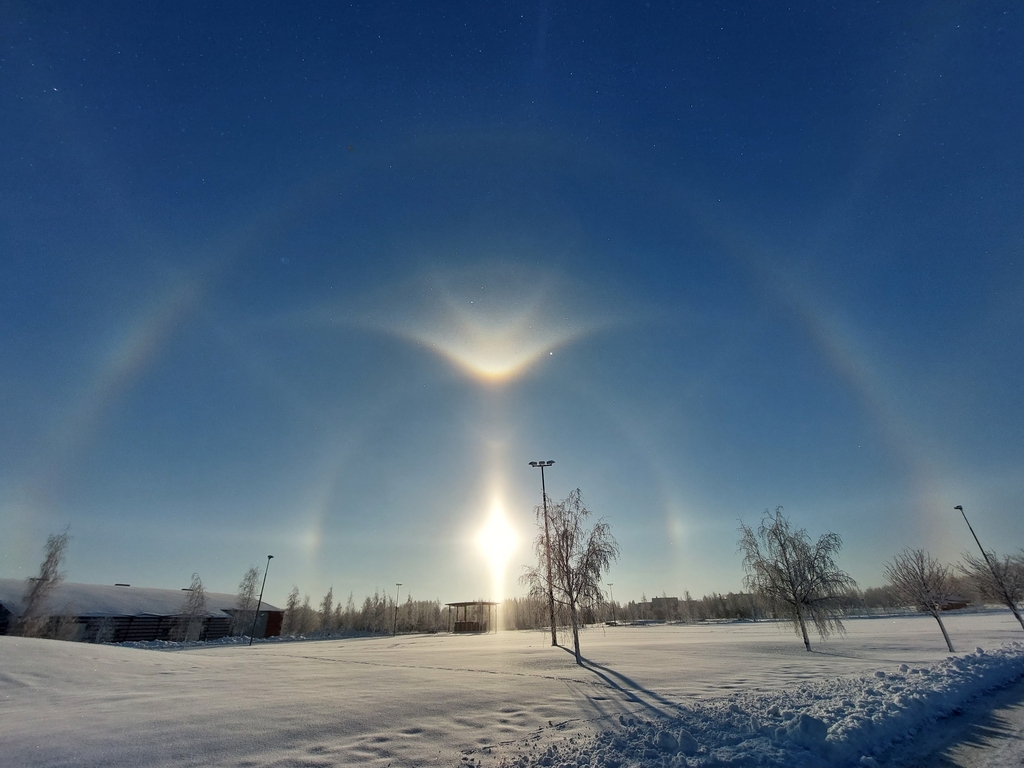 22.1. The first pictures in Skywarden from halos in Porvoo and Lahti on 21. Jan was just warm-up. Now the additional material received from several observers shows that the display was quite dazzling in the best places. Shown is Ulla Ojanen's view in Lahti. Images appear to show that the halo display was is created when a low stratus turned into ice crystals. Also on 22.1. haloed better than usual. 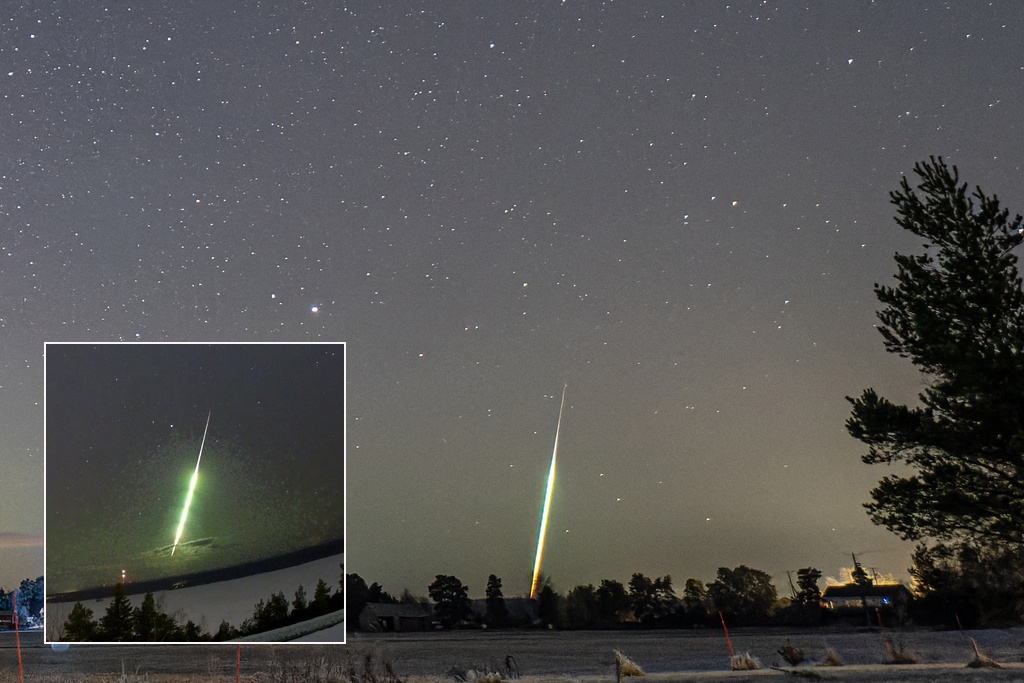 22.1 . In Masku, Tampere and Kajaani, a handsome fireball was photographed on Saturday. The Tampere shot is from the northern lights camera, Petri Mäkinen got it on his normal camera in Masku. In Kajaani, the fireball was visible through the clouds to Kari Nissinen's automatic camera. He also reports about a sound the camera recorded after the fireball.

Meteorological light phenomena of the past few days 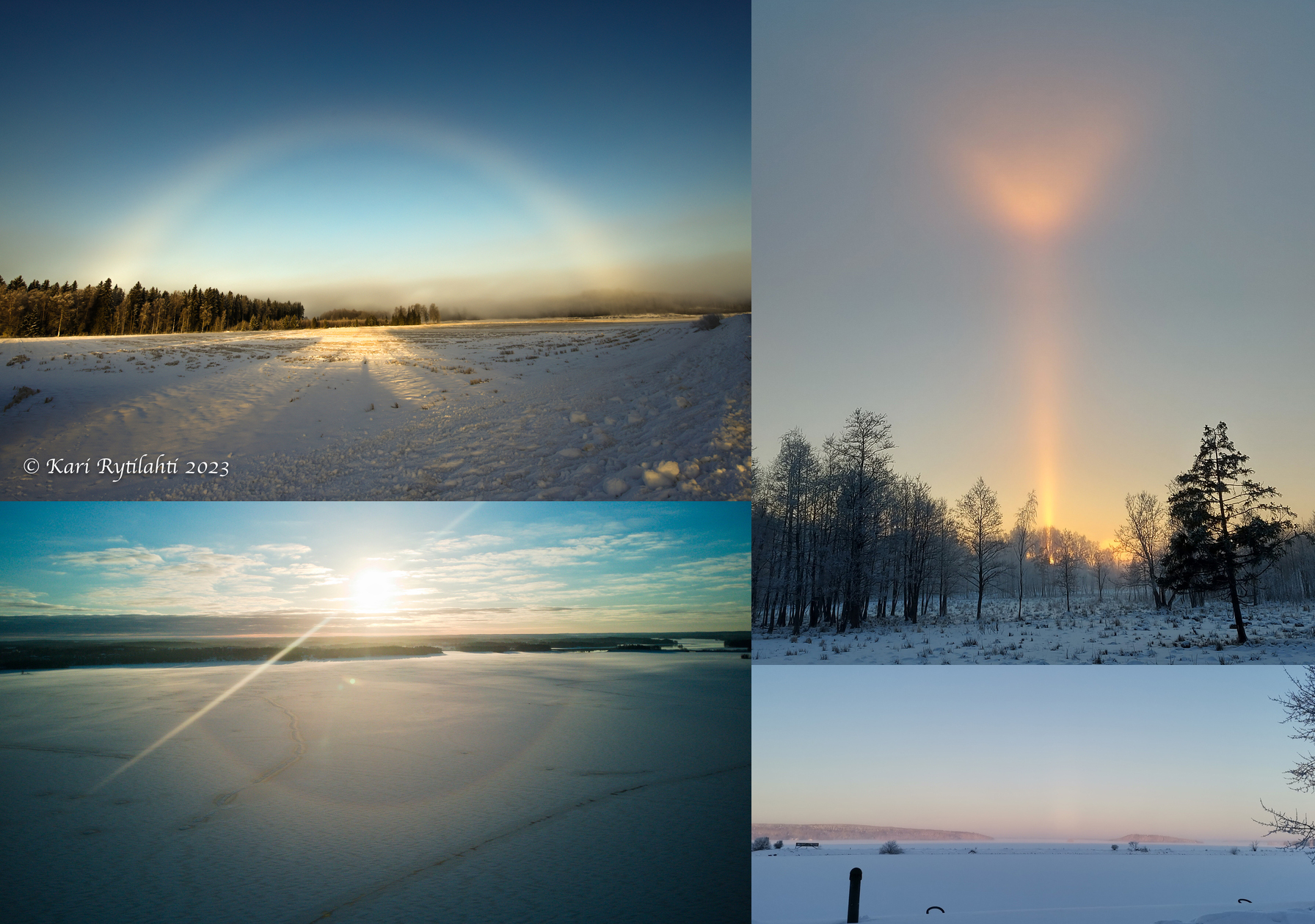 22.1. Different phenomena of ice crystals and fog droplets from yesterday and the day before. On the upper left, the fogbow seen by Kari Rytilahti, below it 22° halo on a lake ice captured by Kalle Helenius' drone. Peter von Bagh in Porvoo (upper right) and Reima Eresmaa in Lahti photographed similar-looking halos on January 21, but the open lake view helped the latter also get a rarity, a weak anthelion low on the horizon (lower right).

The zodiac light is already visible 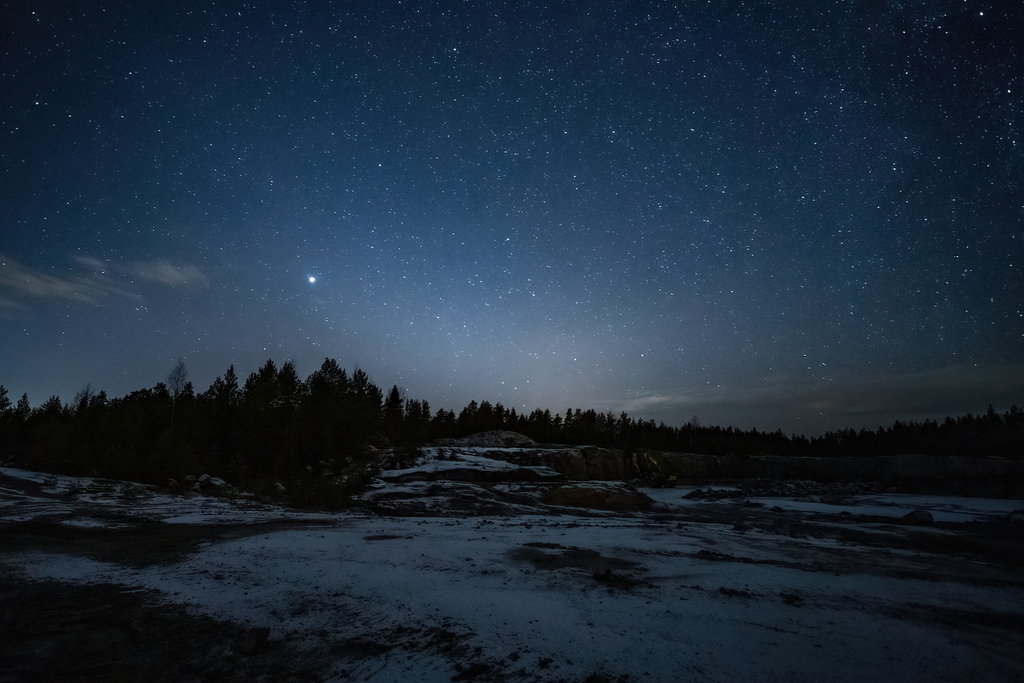 22.1. This year's zodiac lights season started on 20.1 with photos that Pirjo Koski took in Laitila. Of the winter months, the only one in which there are no observations of the zodiacal light in Skywarden is December. Even in November just one observation from the first day of the month is known. This year got an early start but there are earlier reports. The record is from the year 2020, with Koski again at it and capturing the zodiac light on 16 January.

Earth shadow from an airplane 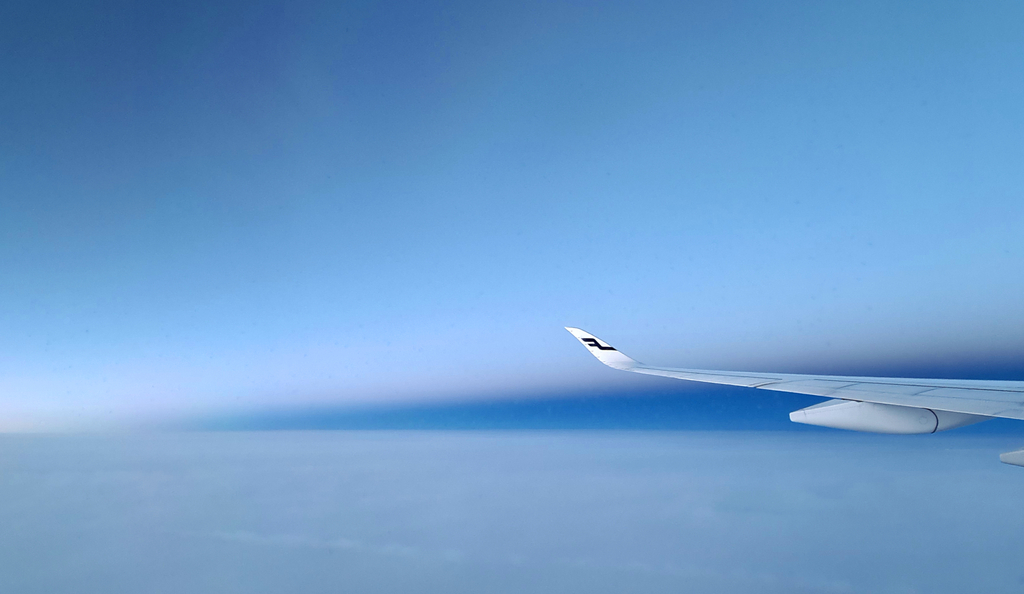 16.1. "From above the clouds, you get a completely new understanding of the phenomenon," writes Henrik Nygård about the earth's shadow he saw over southern Europe. When observed from the surface of the earth, the shadow is phased more softly in the part of the atmosphere above it that is still illuminated by the Sun. From high mountains, however, you can see almost the same knife-cut shadows as you can see from an airplane.

The clouds opened to the northern lights in the north 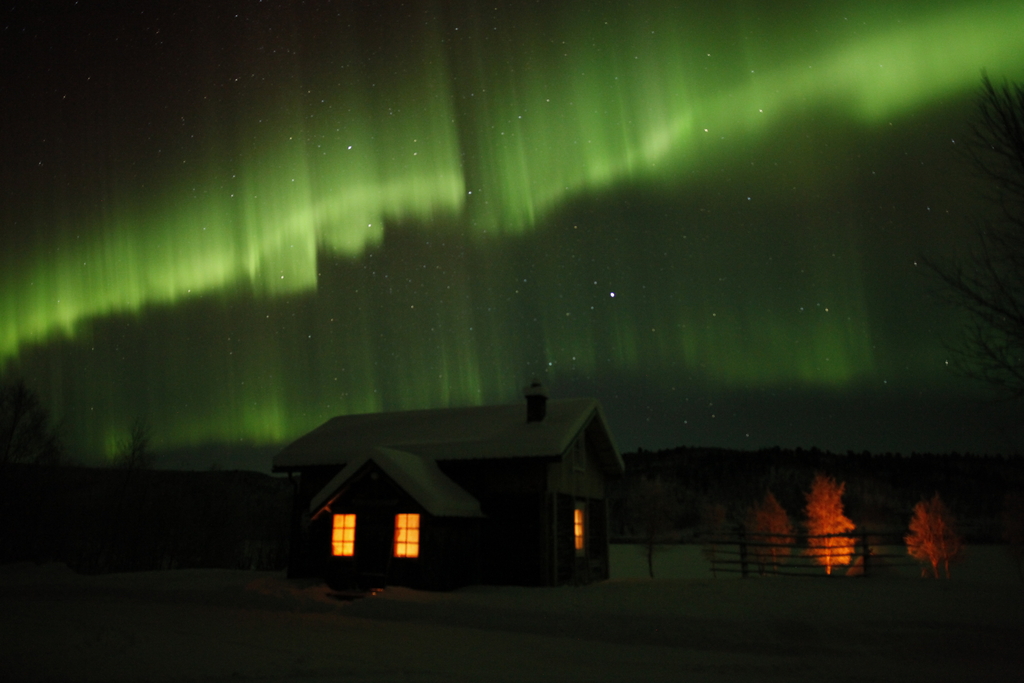 15.1. The long cloudy period ended the night before Saturday with the aurora borealis in Lapland. "Finally, after many cloudy weeks, decent northern lights", writes Ritva Reinilä from Muonio. The view in the photo is from Antero Isola from Utsjoki in twenty-degree freezing weather. "I watched and filmed for about three hours and the show just kept going," says Isola. 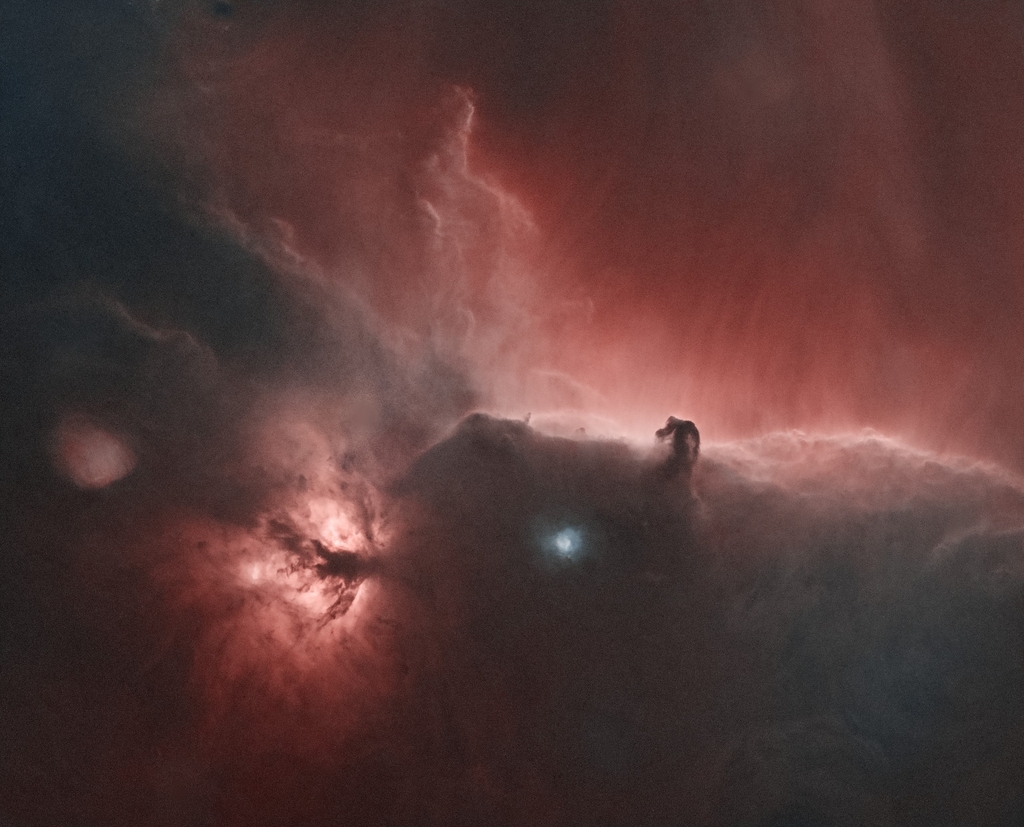 13.1. Tapio Lahtinen, a regular user of the Fregenal de le Sierra remote telescope in Spain, photographed the IC 434 emission nebula in which a shadowed area makes the Horsehead Nebula. Lahtinen writes that he saw a nice version of the object with a rarer image palette and decided to try the same thing himself. "I am very satisfied with this, especially since I got rid of the disturbing stars," he says. 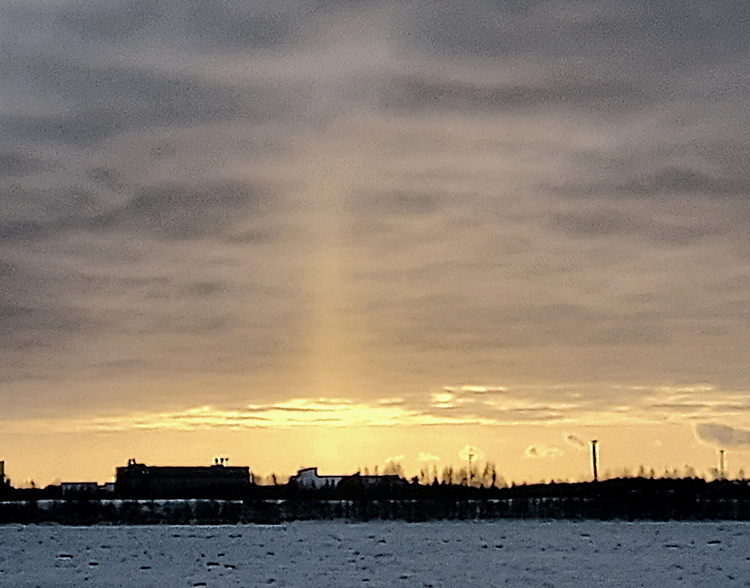 7.1. Halo year has started on a very good note. Tuikku Asikainen was caught in Pori on 6.1. the reflection of the lower sun. The phenomenon can be seen in the picture as a diffuse pillar against the cloud raft. Its primary light source is the reflection of sunlight from water or ice. 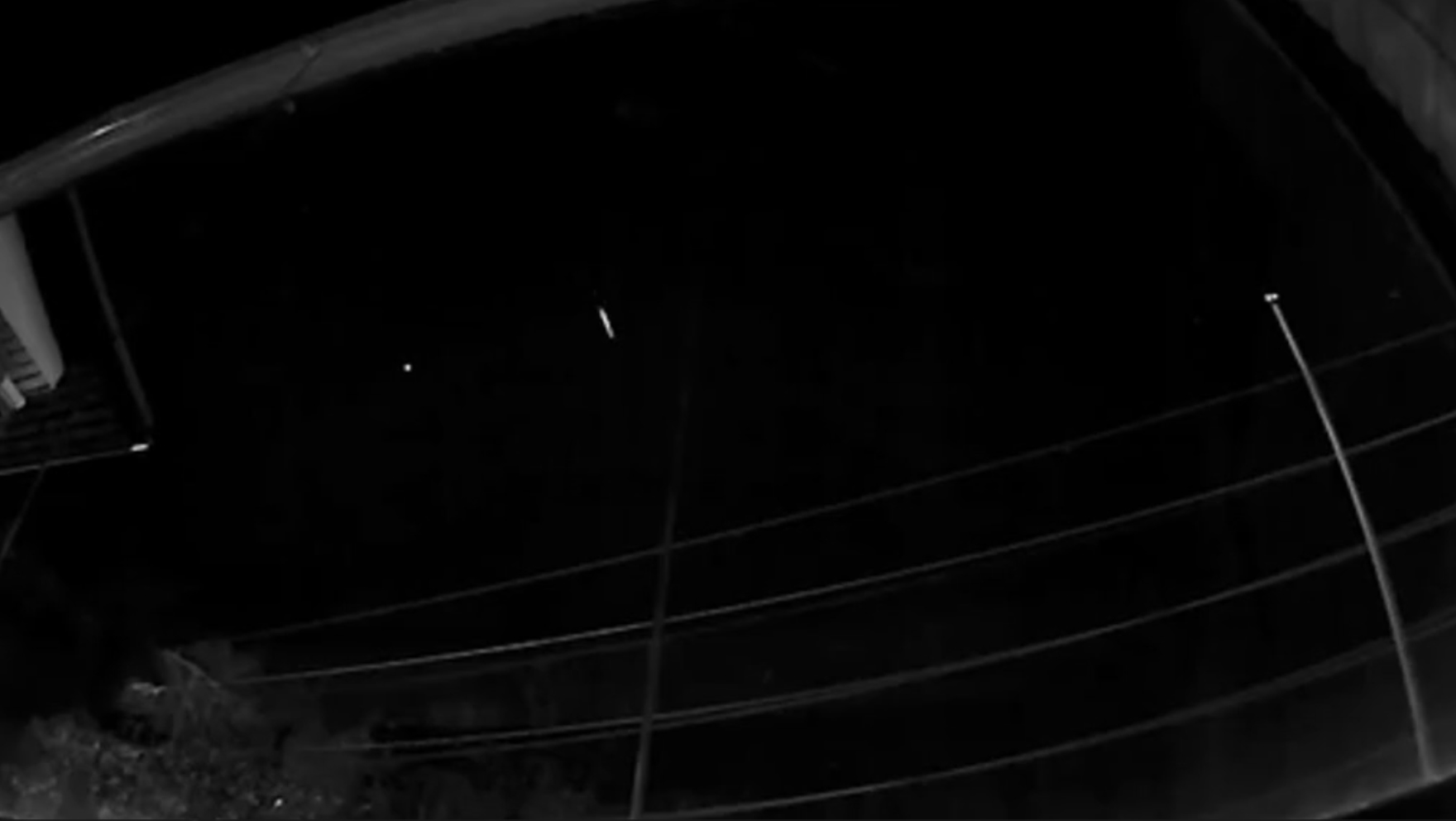 7.1. From the maximum night of the quadrants 3/4.1. there were no observations at all. The only reports in Taivaanvahti are the three probable quadrantite fireballs caught by automatic cameras of Vesa Vasankari (photo) in Jyväskylä two nights before. Based on international observations, the ZHR value – the calculated corrected number of meteors per hour seen under optimal conditions – seems to have been around 40, which is a very low reading. 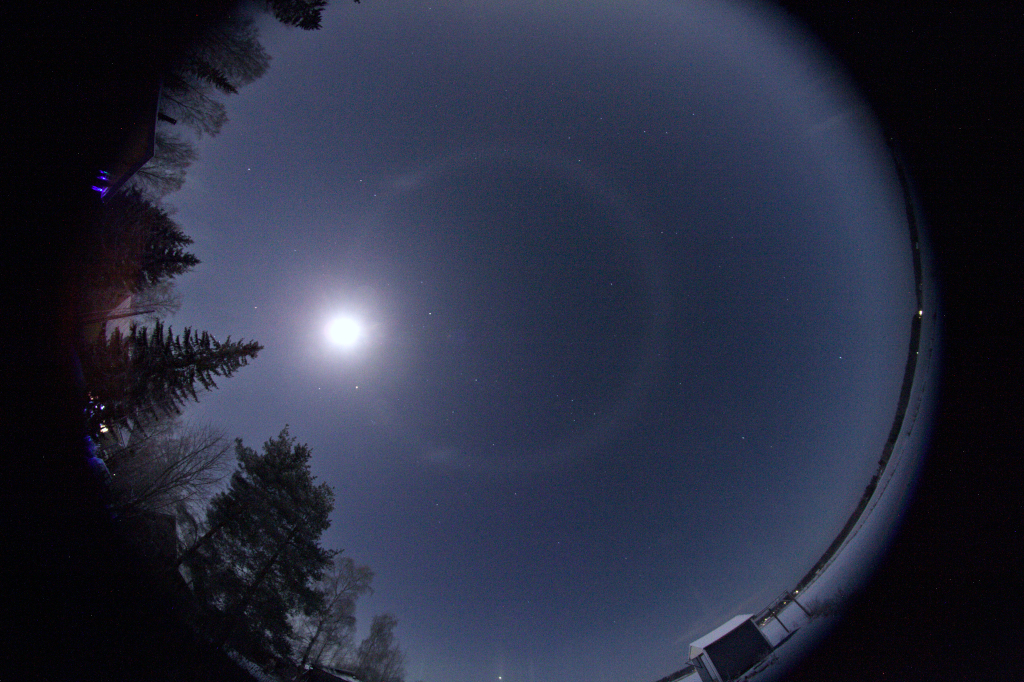 6.1. The diamond ring visible in solar eclipses has its counterpart in halo phenomena. On Ilmajoki 4.1. Jan in a display photographed by Mauri Korpi the parhelic circle has the Moon as a jewel on it. This requires all crystals to fall in plate orientation. Of course, the parhelia spots break the impression a bit. They disappear at an altitude of 60 degrees at the latest, but from an altitude of 57 degrees circumhorizon arc comes along.

Uranus was seen going behind the Moon

3.1 . There are currently four observations of the eclipse of Uranus, which started on the night of 1/2 Jan around half past one. One of the observers was Petri Martikainen, whose video is shown here as a shortened and cropped version. The more challenging exit from the bright edge of the moon an hour later was not observed. 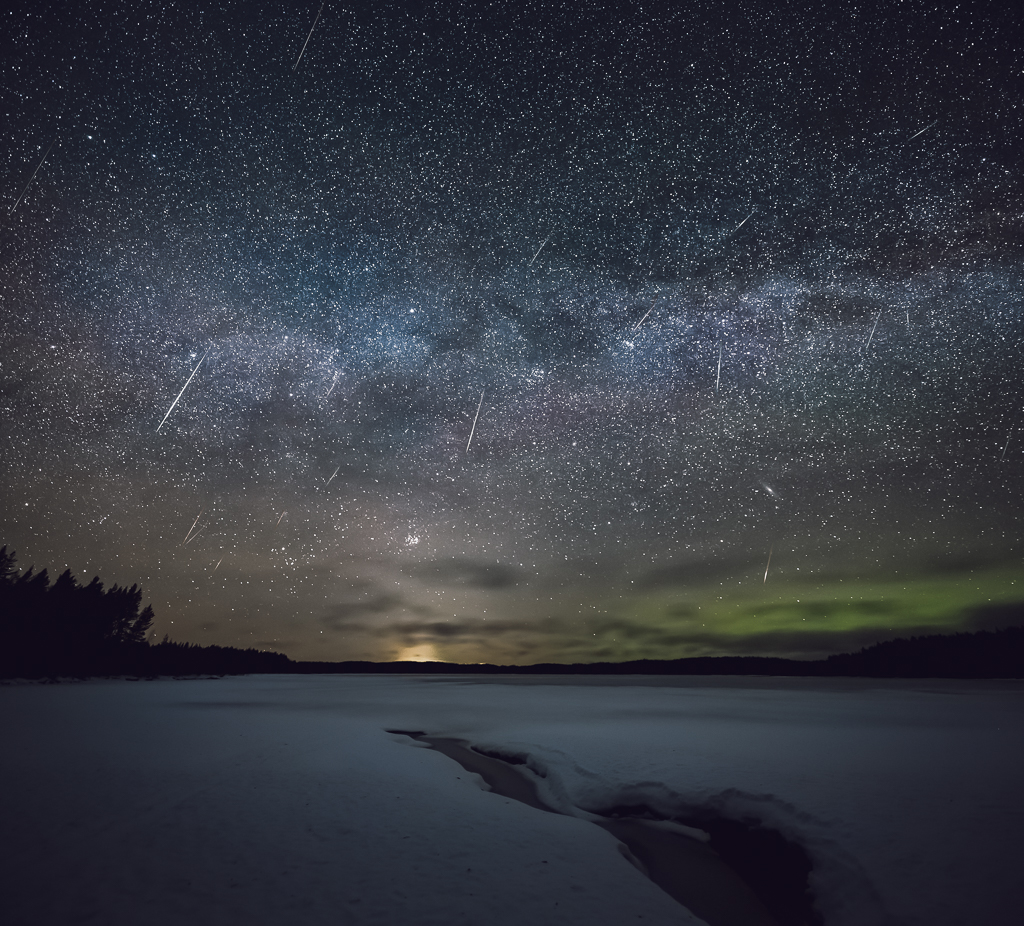 2.1 . The calculated maximum of the Quadrantids is 3.1. at 22:40 Finnish time. At that time, the radiant is 31 degrees above horizon in Utsjokoki, 22 degrees in Helsinki and rising higher. According to the IMO, the peak of the meteor shower is relatively sharp, lasting about six hours, and there are fluctuations in activity, which is why it is good to observe for at least an hour if at first you can barely see meteors. In the picture, Satu Juvonen's shooting stars during the maximum of the 2020 Quadrantids.

Uranus goes behind the moon next night 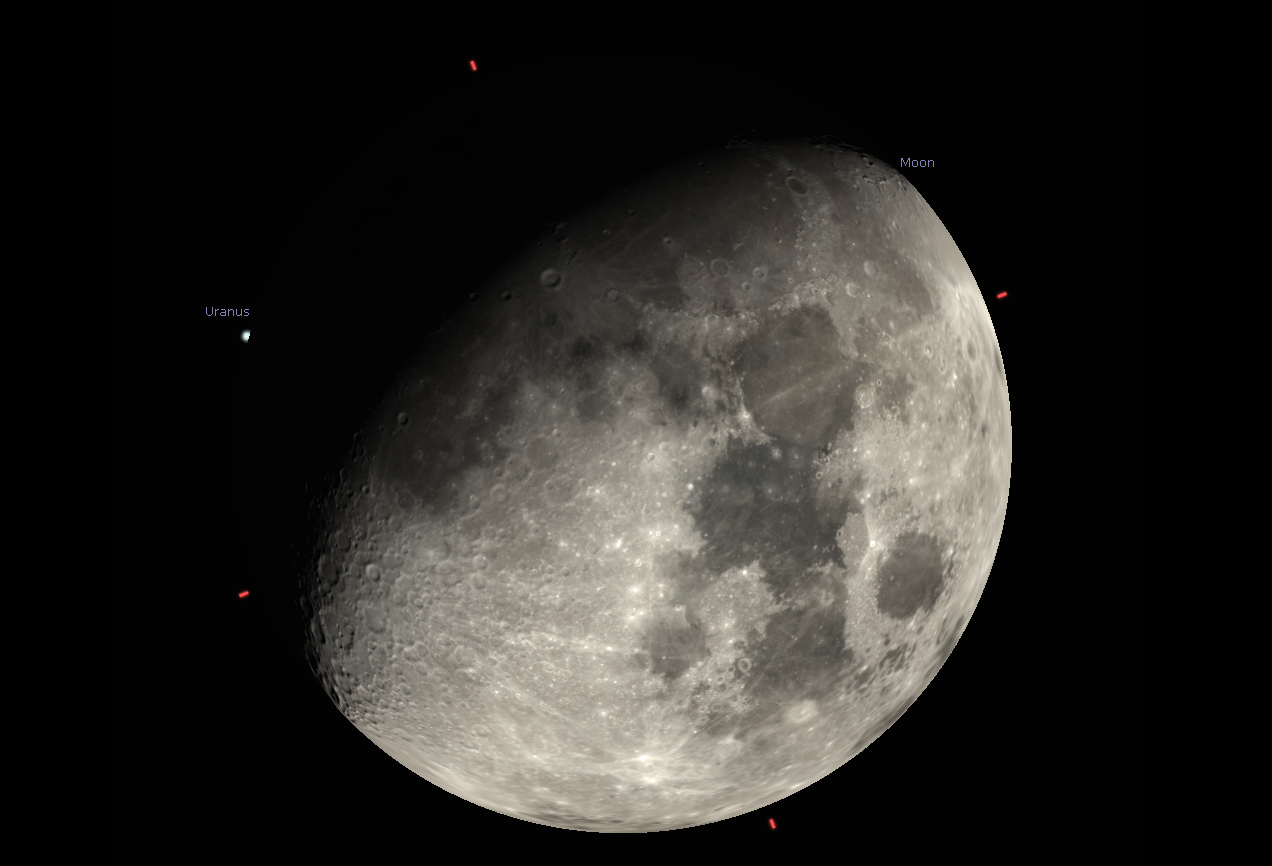 1.1 . The early December eclipse of Uranus was not seen, but a new opportunity presents itself on January 2. The start and end times are 00:36-01:29 in Helsinki and 00:20-01:22 in Utsjoki. The moon is 78% illuminated, the occultation starts from the shadowy and ends at the illuminated edge. And example is given by the observation on 14.9.2022, where it was possible to record both entry and exit. Image Stellarium.