A night of starflight and northern lights

December 14-15 With the exception of Eastern Finland and northernmost Lapland, which are covered with clouds, a great northern lights show was experienced. That night was the maximum of a gang of starbursts. Moving to the midnight side, the radiation point of the meteor flock rose to an ideal high and geminides were abundant. 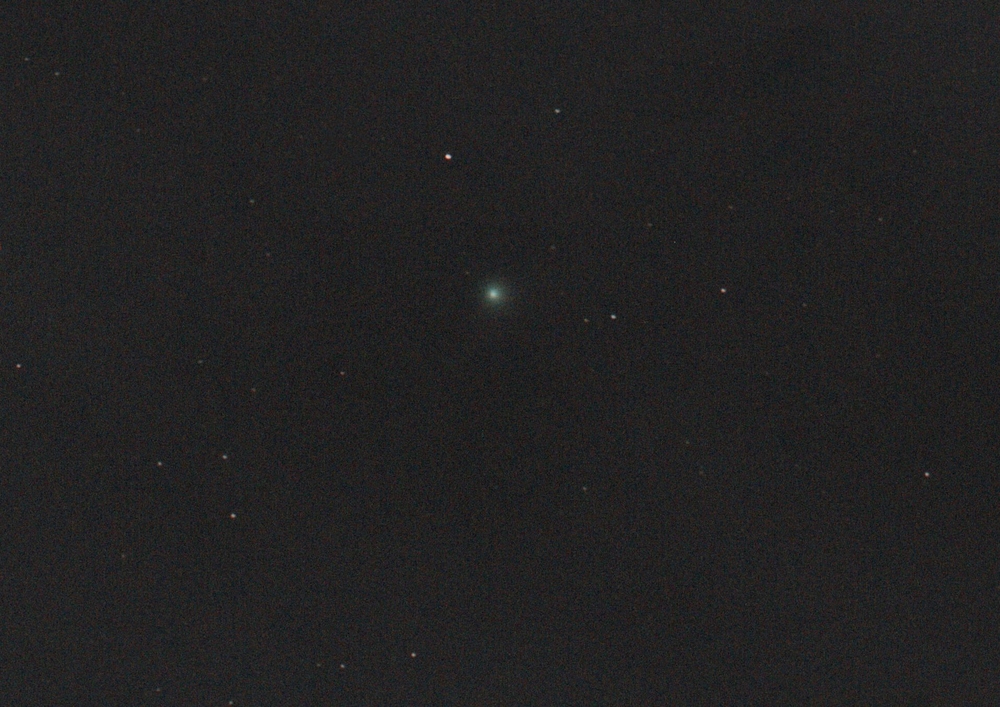 The binocular comet C / 2013 US10 (Catalina), which previously moved in the southern hemisphere, is finally visible in Finland . Primarily, pictorial observations are requested from the comet. Photographic observations will also be accepted if they are accompanied by an adequate observation report. Photo: Tapio Lahtinen

Observations of the comet » 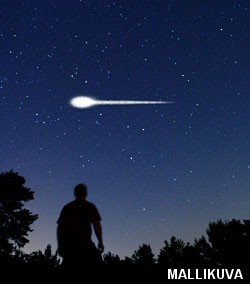 2.11. A bright fireball was seen over southern Finland in the twilight sky around 5:40 p.m. Observations on the case are collected on a fireball form . 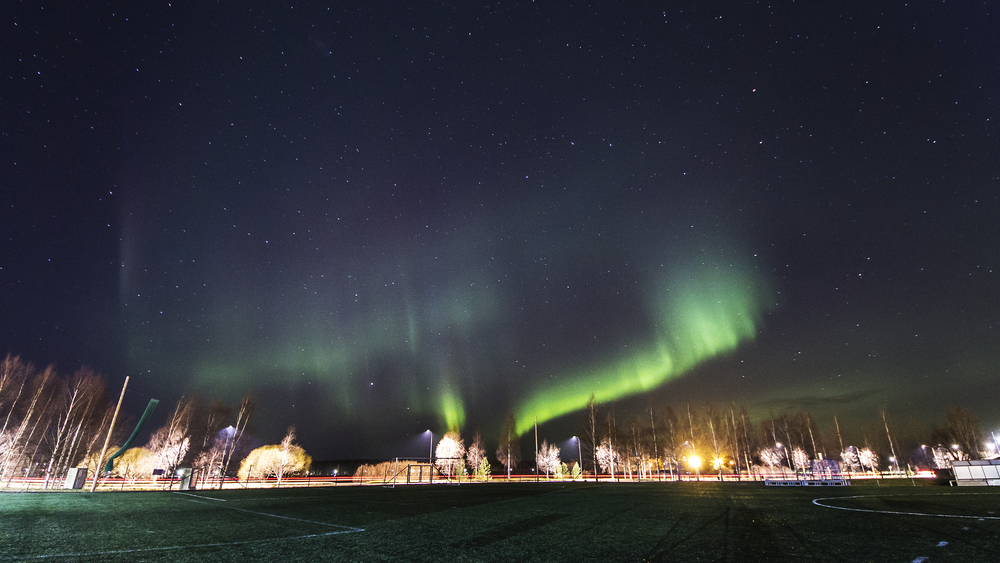 1.11. On the night between Monday and Tuesday 3 / 4.11. there is a good opportunity for northern lights also in southern Finland. Forecasts are always uncertain and no weather can be promised, but in the evening it is worth monitoring the situation. Northern lights observations can be reported using the northern lights form . (photo: Joni Alavesa )

The evening fireball dropped pebbles into the sea 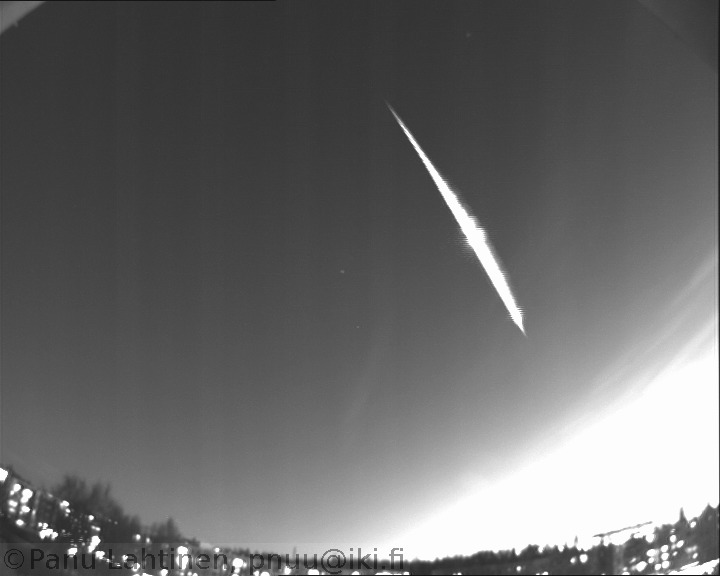 26.10. At about 5:40 pm, a bright fireball was seen over southern Finland. The piece could drop a meteorite into the Gulf of Finland. The fireball was also recorded in the image of Panu Lahtinen's sky camera in Espoo. Observations on the case are still being collected using the fireball form .

Findings from a fireball »

Venus, Jupiter and Mars shine in the morning sky 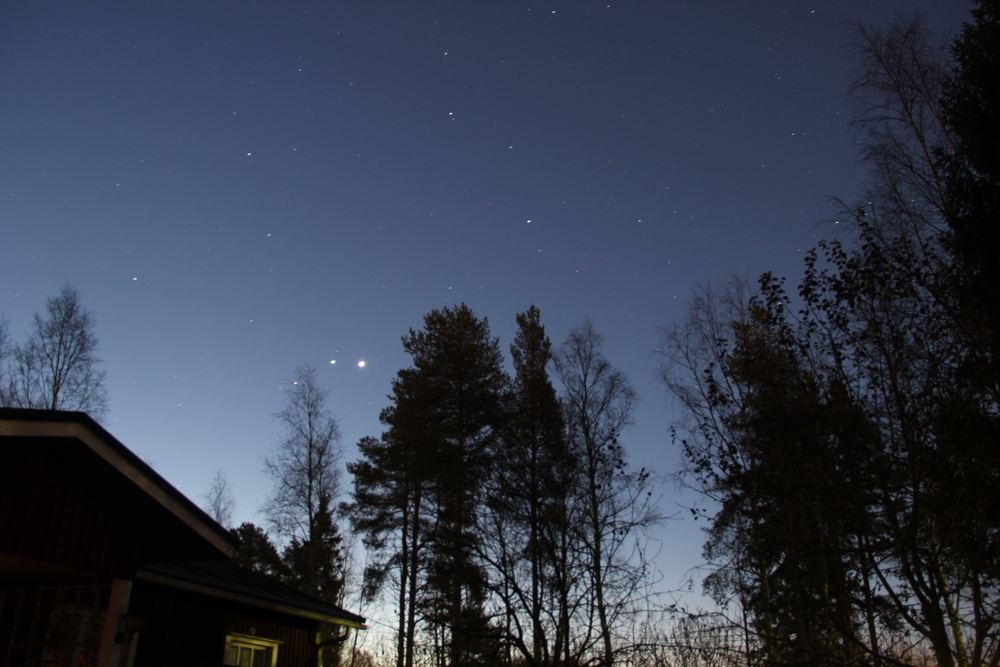 24.10. morning naps have been delighted by the encounter of the three planets at sunrise. Jupiter, Venus and Mars appear side by side in the sky. In addition to the mentioned planets, Mercury is also visible in the morning sky and the Moon has visited the planets in its orbit. Pictorial observations of the autumn encounters are collected using the Solar System form.

Pictures of the planets of the morning »

A big explosive fireball in the direction of Sweden

In Sweden 23.10. a large fireball seen in 1958 was also observed from the west coast of Finland. About 30 reports of the incident have arrived at the Sky Watch. The phenomenon was also observed in Norway and Denmark. The estimated fall area is off the coast of Sweden, a few tens of kilometers from Stockholm.

Finnish observations of a fireball on a map » 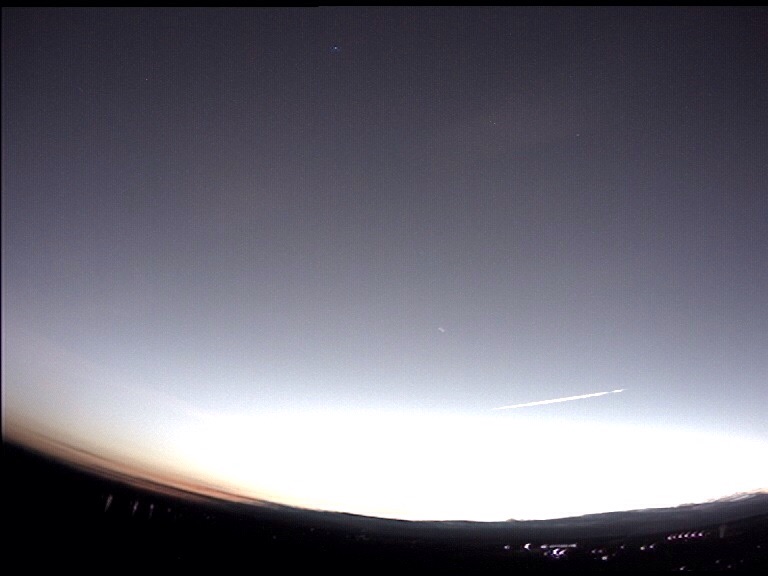 12.10. was seen in much of the country a handsome fireball. The flight was also recorded in Mikkeli's Ursa fireball camera. (photo: Aki Taavitsainen ) 14.10. in the afternoon, a very rare day balloon was seen in Lapland. Findings of exceptionally spectacular ‘star flights’ are still collected on a fireball form .

9.10. For three nights, northern lights have been seen all the way to the southernmost part of Finland. The middle of the nights, October 7/8, was a particularly wide and bright northern lights play (photo: Seija Ropponen).

See Observation Photos from the Northern Lights in early October »

5.10. The Air Force's main exercise LIVEX 2015 will be held between 5 and 9. October. The exercise can use torches that appear over large areas of the earth as balls of light or fireworks. Torches are used to practice fighting infrared-guided missiles. (photo: Joni Malkamäki / Air Force)

The lunar eclipse was visible in places

28.9. complete lunar eclipse was observed at least in the Rauma, Tampere and Oulu regions . Clouds covered the sky in much of the earth. Reports are still collected using the blackout form . If the weather prevented it from appearing, you can select the observation as the title "Maximum eclipse behind the clouds". (Photo: Eila Lehtovaara).

Rare halos in the daytime sky

In the afternoon 9.9. rare halos (eg Wegener's arc, blue line, 120-degree side sun, Parry's arc) were observed, especially in southern and central Finland. More common halos were observed throughout the day, but the peaks peaked at most observation sites for only a short time. Photo: Matias Takala .

A bright fireball in Lapland

A clear fireball was seen in Lapland on Wednesday night 2.9. at about 11:44 p.m. At the same time, observers were delighted by a small northern lights show. In southern Finland, the fireball was covered in clouds. Those who have seen the fireball are asked to record the observation on the fireball form . (photo: Markus Kiili )

Fireball sightings on the map »

28.8.-29.8. as far as the south coast, a northern lights play was visible. In the southernmost part of Finland, the play was dim for most of the time, but sometimes there was a sub-storm with active belts and very bright northern lights in color with the naked eye.

15 / 16.8. there was an admirable rare show: in the summer night sky appeared both green northern lights and illuminating night clouds at the same time. Clear weather favored observing the sky without lapping northern Lapland, and more than 100 observations have arrived at the Sky Watch at night (photo: Mikko Lönnberg).

Observations are collected from the maximum of the perseids

The maximum of the Perseid meteor flock was 12./13.8. Data on the activity of the flock are collected using a solar system form (target ' Meteor Flock '). The observation can be accompanied by a picture of a meteor belonging to the flock or a report on the number of star flights during a certain period of time (photo: Janne Alatalo).

Aldebaran was covered behind the moon

9.8. The declining crescent moon covered Aldebaran from about 1.30 to 2.20 p.m. Observations of both obscuration and occurrence were obtained in the Sky Watch (photo: Kylli Pöyhönen).

The best of the night cloud summer

For two consecutive nights 22./23. and 23./24.7. saw the best night cloud plays of the summer so far. In both, the night clouds hurt in places remarkably strikingly bright. However, the latter play was more extensive and diverse (photo: Peter von Bagh).

25.7. In the afternoon at about 4 pm, a rare and bright halo play created by pyramidal crystals was seen in southern Finland (photo: Olli Hintikka). The best play was seen in the Helsinki metropolitan area and the surrounding municipalities, although observations of the Sky Guard came from elsewhere as well.

The encounter of the two brightest planets has been closely monitored in both the evening and daytime skies. However, the best shots were obtained from the southernmost latitudes. The picture below was taken by Ari Ollikainen in Platanias, Crete.

Pictorial observations of the encounter »

Finland's first night cloud observations this summer have been made. The season was opened by Juuso Nurmio in Turku (see photo). Night clouds were visible elsewhere in the southwestern parts of the country, but to the east detection was hampered by other cloudiness and, to the north, the brightness of the sky. The Rare Cloud Types form can be used to report night clouds.

A new version of the Sky Watch Android client

19.5. A new version of the observation browsing application developed by Arto Oksanen has been published. In the new version, the improvements focus specifically on image browsing features. The app is free to download for devices running the Android operating system.

3.5. Around 11 pm, an exceptionally handsome fireball was seen in Central Finland. The fireball was also recorded in Mikkeli's Ursa sky camera (Photo by Aki Taavitsainen). Observations of the phenomenon are desired with a fireball form . The route of the fireball has been modeled.

Tonight's fireball sightings on the map »

About a year ago, Vesa Vauhkonen's observation has found the world's first photographs of a halo shape theoretically predicted 168 years ago. The arch described by Vauhkonen is a continuation of the successful work of Finns in recent decades in documenting new halo phenomena.

With the arrival of spring, the bright time increases and the conditions for the occurrence of various halo phenomena are often good. This year, too, a special observation campaign called Halohu April will be held in April. Both pictorial and non-pictorial observations are collected on a halo form .

During the "super week" of the star hobby 16.3.-22.3. The Sky Guard broke records due to a northern lights storm, fireball and solar eclipse. Over seven days, the observation service was used by 54,287 users for a total of 79,987 sessions. There were 415,314 individual page views. (Photo by Satu Juvonen)

Pictorial observations of the week »

20.03. After bad-looking forecasts, the weather favored a partial eclipse, and most of the country was allowed to admire the event through at least a thin gauze. In the sky, the eclipse has crowned an awesome week of observation. Photo: Jani Poikela

Findings on the map »

A bright fireball was observed over a wide area

18.3. in the evening sky a magnificent, long-lasting fireball was seen. More than 400 observations of the phenomenon have arrived in the Sky. Observations of the flight of the piece are received on a fireball form . (Photo of Warkauden Kassiopeia)

Findings on the map »

Northern lights would illuminate the whole of Finland

17 / 18.3. at night the exceptionally handsome northern lights were seen all over the country ( map). The Northern Lights play began with the setting of the sun and continued with the rising of the sun, including several underbursts. In Helsinki, the warp stretched to the southern horizon at its best. (Photo by Jani Varpujärvi)

Pictorial observations from the northern lights of the night »

The sun will be partially darkened on Friday 20.3.

20.3. seen at noon a partial solar eclipse . The eclipse should not be monitored without a safe filter ( construction instructions , filter glasses ). Findings are collected on a blackout form . Those who are under the clouds can choose the title "Maximum eclipse behind the clouds". Shooting tips 1 and 2 . (Photo by J. Mannermaa)

Venus and Jupiter in the evening sky

9.3. The bright bright destination in the direction of the sunset is the planet Venus. In the high southern sky, on the other hand, Jupiter shines. Numerous notifications have been received by the administration. Objects that are currently visible in the starry sky can also be identified using Ursa's star map . (Photo: Mikko Peussa)

24.2. Shortly before nine o'clock in the evening, an exceptionally bright fireball was seen over Finland. Those who have seen the phenomenon are asked to submit an observation on a fireball form .

See the findings from the fireball »

Thursday 12.2. The Taivaanvahti service has a maintenance break of a few hours. Minor changes are being made to the system. As a new feature, e.g. much-needed multi-observer support for observation forms.

The comet Lovejoy is still visible

10.2. Comet C / 2014 Q2 (Lovejoy) is still a binocular target in the evening sky . Tapio Lahtinen and Toni Veikkolainen made the first observations of the comet Taivaanvahti at the end of December. Unimaginable observations of a comet are collected if the content includes a careful description of the object or other information such as a brightness estimate.

Observations of the comet »