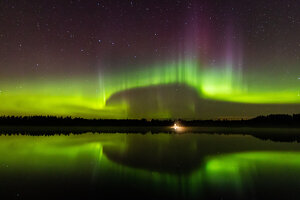 There appeared to be isolated reddish or pink showers on the west side of the normal, mostly green northern lights. This is probably Steve's arch. The phenomenon was visible for more than half an hour.

A calm arc of northern lights was visible on the northern horizon as early as 10pm when I arrived. From time to time, the northern lights activated and rose higher, causing the camera to distinguish colors other than green. The colors did not separate with the naked eye. 28.9. after 1 p.m., I noticed fast, about 1-second heart rate-propagating "waves" that rose high.