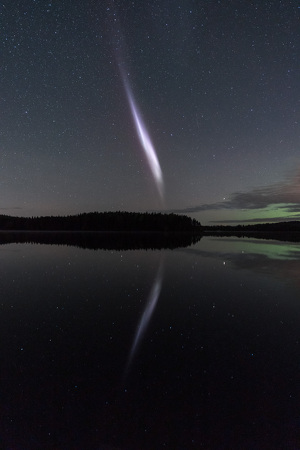 The weather forecast peaked on a cloudy night, and that’s what it looked like at first; my first mooring place was firmly in the cloud. However, in the direction of the north, a promising small opening was visible, so I decided to go and see if there would be a suitable place to use it - and it was there. The sky was clear, except for one cloud raft that covered almost all the green that was on the northern horizon. I waited a long time without seeing the northern lights, and I didn’t even bother to set up the camera equipment. Then a "torch" began to rise from the west / northwest, the development of which I admired, completely forgetting to take pictures. Eventually I realized digging into the camera backpack, and got a picture of the already fading STEVE.