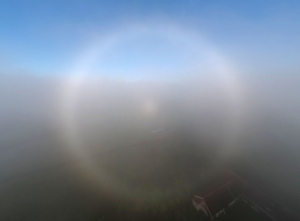 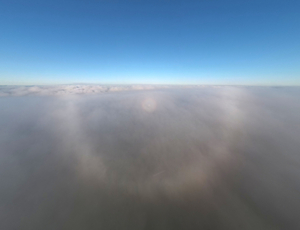 In the morning, the whole landscape was covered in fog and even the Sun couldn't really shine through the fog. I used a drone to investigate the thickness of the fog layer on this hill in the village and found that it was about 90 meters. I took some pictures, of which here are a couple of examples. The first picture is slightly below the top edge of the fog, the purpose was to get a full circle from it in the pictures. Somehow it worked out, even though that arc was very sloppy. The second picture is from above, you can clearly see the unevenness of the upper edge of the fog. The pictures have been moderately edited (levels, contrast).